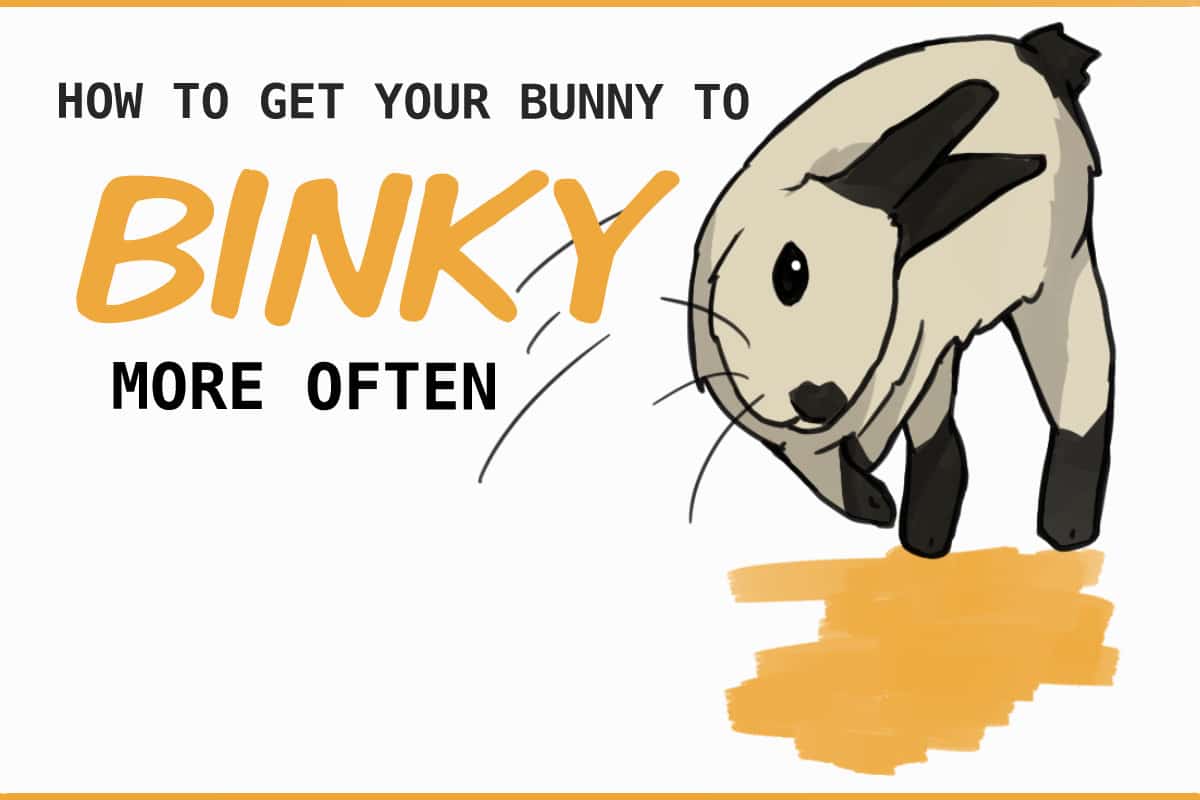 So you recently brought a new pet rabbit home, and you noticed they started doing these weird twisty jumps all over the living room. If you’re a new rabbit caretaker, this behavior might startle you. You might think your rabbit is showing fear or even having seizures while they hop around. Good news! Those weird twisty jumps are nothing to worry about, and are actually a sign of a happy rabbit.

When a rabbit does a weird twist and jump in the air, it’s called a binky. Rabbits do this when they have so much happy energy that they just can’t contain it. If you have a rabbit who is binkying all over your home, then you know you’re doing something right because you have a happy bunny.

But what if your rabbit doesn’t binky very much? Does that mean you’re doing something wrong and your rabbit is never happy? Lets go over the details of binkying rabbits, including what causes them to binky and even how to get your rabbit to binky more often. We’ll also look at other ways that rabbits express their happiness, so that you’ll know you have a happy rabbit in your home, even if they don’t binky very often.

What is a binky?

A binky is what we call that crazy jump and twist that rabbits do. Some binkies will look like big beautiful leaps while the rabbit kicks their feet out. The rabbit might twist so much in the air that they completely turn around. Other rabbits binky with smaller twitches when they are zooming and wandering around.

However your rabbit shows it, a binky is always an expression of joy. Your rabbit is just too happy to stand still in one place. That’s also why binkies are also often accompanied by high speed dashing and zooming around the room.

When a rabbit is feeling just a little bit less energetic they may instead do a mini binky (or sometimes I call it a happy). This is when just the rabbit’s head and sometimes shoulders do a little twist, but their whole body does not come off the ground. Mini binkies are more common in older rabbits and bunnies that are a little more laid back. It still means that your rabbit is very happy and excited. They just don’t feel like going for the full binky.

Wild rabbits across many different species (including cottontails, European rabbits, etc.) have, in fact, been observed binkying. They may not binky as frequently as house rabbits, since they likely don’t feel safe and carefree the way our pets do.

With wild rabbits it’s also common to see a behavior that, at first glance, may look like a binky, but is actually a defensive aggressive behavior. When a rabbit jumps straight up, this is a defensive behavior to make themself a little bigger. They may also lash out with their claws, or try to thump at an approaching invader with their strong hind legs. This type of behavior can be directed at other animals or other unfamiliar rabbits.

I am reminded of a video that was going around a number years ago with a rabbit and a deer. Many viewers thought the rabbit was binkying and playing with the deer, but the body language is actually different. You can see the rabbit is jumping straight up and occasionally tries to swipe at the deer in the video. The rabbit’s behavior is trying to get the deer to go away because the rabbit is either afraid or territorial.

Why do rabbits binky?

We don’t really know why rabbits binky. The closest guess that we have is that this fun behavior may give a rabbit practice in evading predators, but that’s not really known. All we know is that it’s a normal instinct in rabbits. It’s like an inexplicable expression of joy, much like dancing is for humans.

There are other animals that have similar behavior to binkying in rabbits. Guinea pigs and chinchillas have, what is called, popcorn jumps. The will randomly pop up and down, sometimes adding in a little twist to express their happiness.

When do rabbits binky?

There are a number of factors that can influence when a pet rabbit binkies. Everything from your rabbit’s personality, lifestyle, and overall health will have an effect on how often they binky. While not every condition needs to be met perfectly for a bunny to be happy enough to binky, these factors can all have an effect on when your rabbit chooses to binky.

How to make your rabbit binky

Other ways that rabbits express happiness

If your rabbit doesn’t binky very often, that doesn’t mean they’re not happy. There are plenty of other ways your rabbit is telling you how happy they are with their body language. Watch your rabbit to see which of these other behaviors they regularly express.