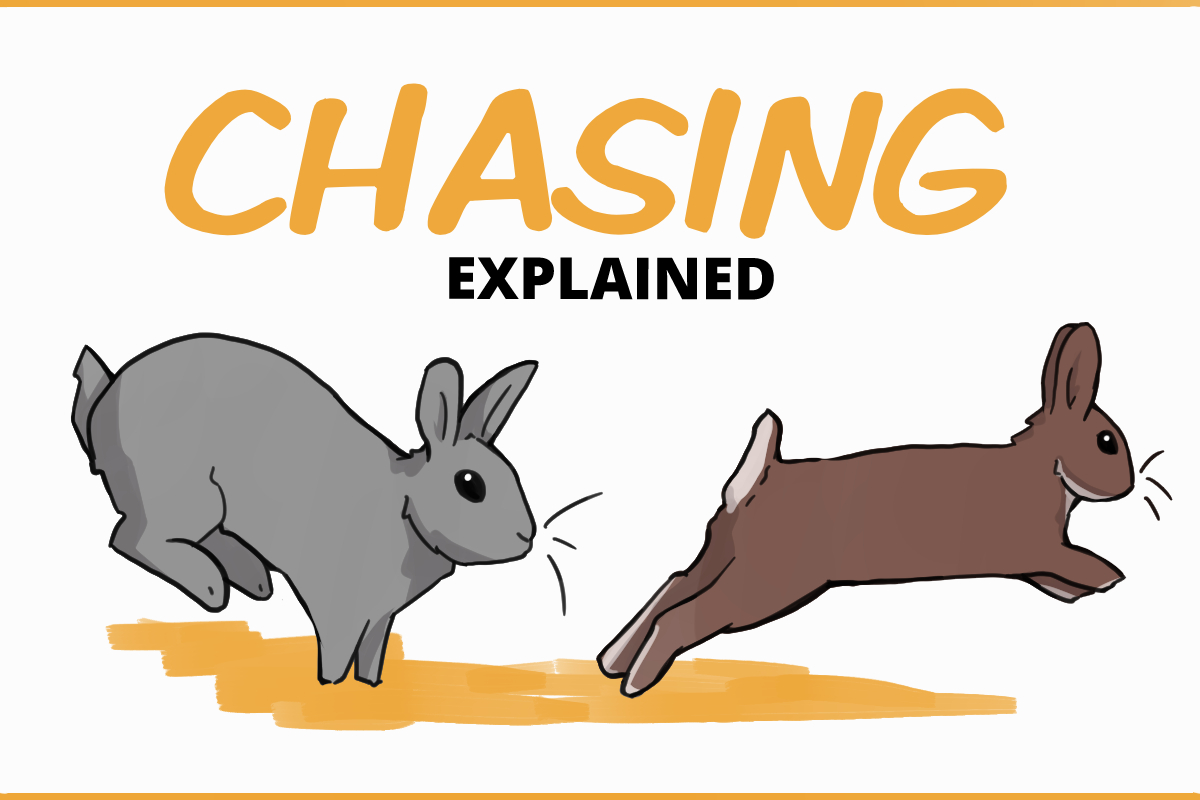 Bonding two rabbits can be a daunting process. It’s not uncommon for rabbits to fight or act aggressively toward each other before finally becoming friends. However, in some cases, behavior that appears aggressive is actually helping your rabbits figure out their relationship with each other. Chasing is one of those behaviors.

One rabbit will chase the other to claim dominance during the bonding process. This is expected behavior that should not be discouraged. If a chase goes on for longer than 30 seconds, interrupt the rabbits, so it does not turn into a fight.

If you’ve never bonded rabbits before, you may not know the difference between a fight and a chase. I’ll help you to learn what kind of chasing is expected for your rabbits and how to prevent it from turning into a fight. Learn more about the process of bonding rabbits, so you know what to expect.

Why do rabbits chase each other?

Chasing is a standard behavior that you will see during bonding. You may see it occasionally after your rabbits are a happy bonded pair too. Chasing looks a little bit scary to watch if you are new to bonding. However, it’s not necessarily a bad thing.

This chasing behavior should not be accompanied by any truly aggressive behavior. While you might see the occasional nipping or tuft of fur being pulled, the rabbits are not actually trying to harm each other but instead remind the other rabbit who is the boss. As the pair get closer together and sort out their relationship with each other, you’ll see them chasing less and less.

Once the rabbits have been fully bonded, you might not see any chasing at all. Since the rabbits know their place in the relationship, there is no need to continue the chasing ritual. However, you still might see this behavior every once in a while if the dominant bunny gets upset at something the other rabbit is doing or if they want to reassert their dominance.

What is the difference between a fight and a chase?

Chasing is a normal behavior to expect during bonding that you should allow to continue. This is not a true fight where the rabbits are getting territorial with each other. However, it can look similar to other behaviors that are aggressive. A chase is part of the bonding process and should be allowed to continue, while you should break up a fight as soon as it starts. You’ll need to learn how to tell the difference between these two behaviors so you can respond appropriately.

Normal chasing behavior is when one rabbit runs after the other. There will be one rabbit running away and one chasing. Typically, you will start to see a pattern in the relationship where one rabbit (the dominant rabbit) is always doing the chasing. Chasing might be accompanied by a nip that can pull a small tuft of fur but should not include any seriously aggressive biting or lunging where one rabbit is trying to hurt the other rabbit.

Chasing may seem scary to watch, but as long as the rabbits aren’t actually hurting each other, then it can help them work out who is more dominant in the relationship. It’s good to allow small chases to happen. Typically, they will only be short spurts that last for less than 10 seconds. However, if the chase lasts for more than 30 seconds, you may want to step in to prevent it from escalating into anything more serious.

When you notice aggressive behavior with the chasing, that’s when you need to step in. When rabbits start to show aggressive body language, they will raise their tail while their ears go back at a 45º angle. They might also growl and lower their head as if they are getting ready to charge. If you notice this behavior, give your rabbit a little squirt of water on the forehead to prevent them from actually attacking. This will cause them to pause and start cleaning themselves instead.

When both rabbits want to be the dominant rabbit, a chase can turn into a fight instead. Neither rabbit will run away to accept the lower position in the relationship, and they will attack each other. When this happens, the rabbits will start a bunny tornado.

This is when the rabbits circle each other in tighter and tighter circles until they are moving so fast they look like a bunny tornado. This is a serious fight that will cause fur to fly as the rabbits try to bite each other. If it’s not broken up as quickly as possible, it can result in serious injury, so the rabbits should be separated and given time to cool off.

Use a dustpan, broom, or heavily gloved hand to prevent injury to yourself because the rabbits will not be able to tell the difference between you and the other bunny when they are moving so quickly.

When should you stop a rabbit chase?

In general, you should stop rabbits from chasing each other when it’s gone on for longer than 30 seconds. If the chase is allowed to continue for longer periods of time, the rabbit being chased may get frustrated and turn to fight back.

You should also stop a chase if there is any serious aggressive behavior involved. If the chasing rabbit is actively trying to bite, swat at, or corner the other rabbit, it can lead to injury. If the chase has not escalated to a tornado, you can usually stop the chase by giving the dominant rabbit a squirt on the forehead or disrupting them with a loud sound.

When will rabbits stop chasing each other?

Chasing will probably happen frequently when you first start bonding your rabbits. During the first few days, and even the first few weeks, you should expect to see this behavior a lot. However, as your rabbits get to know each other and accept who is more dominant in the relationship, you should see fewer chases.

One of the ways you will know your rabbits are ready to move in together is when they have pretty much stopped chasing altogether. It’s a good idea to observe your rabbits for 24-48 hours before moving them in together to make sure they can go for that long period of time without having any serious chases.

Will rabbits chase after they are bonded?

By the time your rabbits are fully bonded, you should hardly see any chasing at all. However, you might still see the occasional chase. Sometimes one rabbit will want to reassert their dominance, and sometimes one rabbit does something that upsets the other. They’ll have minor disagreements that can look like a chase.

For example, I notice small chases with my rabbits most often when the dominant rabbit, Ellie, wants to make sure she gets the first bite at mealtimes. Once she’s eating, Ellie doesn’t care if her partner, Teddy Bear, comes to join her, but she has to make sure she gets the food first, so she will chase Teddy away. Something like this is nothing to worry about as long as no one gets hurt and the second rabbit doesn’t get too anxious to eat.

link to How to Care for Giant Rabbit Breeds

When most people think of rabbits, they imagine small balls of fluff that don’t reach more than 5 pounds. But did you know there are some breeds of rabbits that reach over 10 or even 20 pounds?...

Rabbits are naturally skittish creatures. It’s normal for them to be afraid of people until they get to know you. Even after you’ve befriended a rabbit, something can be a little bit off and...

Learn more about how you can get quality hay (even ORGANIC hay!) from Small Pet Select!