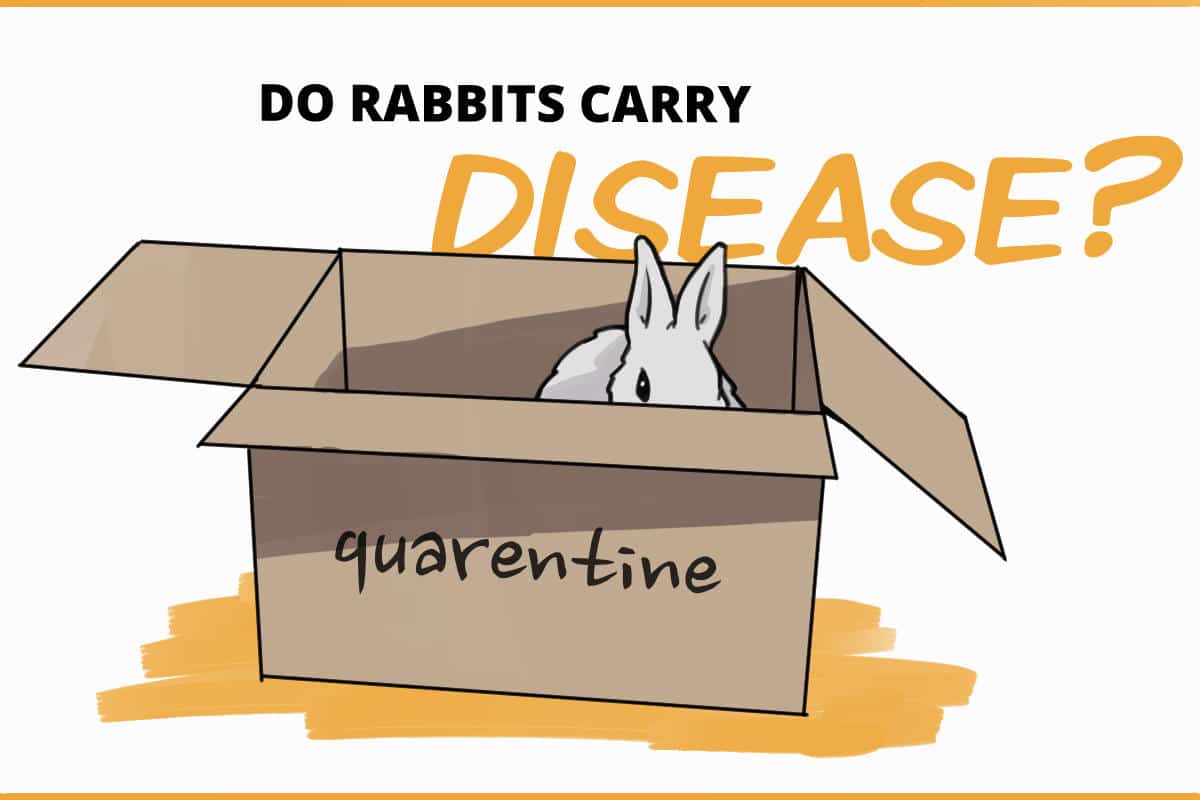 Most domestic rabbits are perfectly safe to handle and interact with. There is very little chance they will spread any contagious disease to humans. Wild rabbits have a slightly greater chance of spreading disease if you come into contact with them, but they do not tend to be common disease spreaders.

Rabbits can carry a number of diseases that can be spread to other animals or humans. The more dangerous of these include Tularemia and E. cuniculi. Despite this, it’s very rare for rabbits to spread any contagious disease to a human. It’s best to take some basic precautions when handling your pets and controlling how they interact with each other.

For the average person, there is very little need to worry about catching a disease from your rabbit. However, if you or someone in your household is immunocompromised, it will be more important to take the necessary steps to prevent potential spread of disease. It will also be important to pay attention to your other household pets to keep from spreading diseases between them.

Contagious diseases that rabbits can carry and spread

Rabbits are not major carriers of disease like mice or some other small animals are. In fact, you are much more likely to catch disease from fellow humans than from your household rabbit. Usually the most you would have to worry about is a minor infection around the area of a bite wound or scratch even if your rabbit is a carrier for any of these diseases. However, it is theoretically possible to catch a number of different dangerous infections from a pet or wild rabbit.

Most other household pets also have little to worry about around your rabbit. Cats and dogs would mainly only be able to catch parasites, such as fleas or mites, from a rabbit. They are more likely to be the ones infecting the rabbit with these infestations. Guinea pigs, however, can catch a serious illness from rabbits who carry a certain kind of bacteria, so you may want to keep your pet rabbits and guinea pigs separate.

Tularemia, also known as rabbit fever, is a disease caused by a bacterial infection. It can cause ulcers and swollen lymph glands. In severe cases the bacteria will make its way to the lungs and cause symptoms of pneumonia. Other household pets can also be susceptible to this illness. Domestic cats in addition to small pocket pets, such as hamsters, can catch and spread this disease.

How Tularemia is spread

Tularemia is spread when a person comes into contact with animals carrying the bacteria F. tularensis. This is more often spread in outbreaks among wild rabbits. It is spread to humans either by ticks and other insects that have been in contact with an infected rabbit or when a person comes into contact with the deceased infected animal. In rarer cases it can be passed on through contaminated food and water, or from breathing in dust particles that contain the bacteria.

It’s rare for rabbits to carry and transmit salmonella, but it is possible. Salmonella is a bacterial infection that can cause diarrhea and vomiting in people. It can cause serious illness in young children, immunocompromised, and elderly people.

How salmonella is spread

Usually rabbits will ingest the bacteria causing salmonella from food that they eat or drink and will spread it through their feces. Some rabbits may show signs of depression, fever, or diarrhea, but others can spread it while appearing perfectly healthy. Pet rabbits are not a common animal for spreading salmonella.

Ringworm is a fungal infection that causes circular rashes on the skin and scalp. While not particularly dangerous, it can affect many different types of pets, including rabbits. The annoying and itchy rashes can cause hair loss and easily spread to other areas of the body, such as the paws or fingers.

How ringworm is spread

Ringworm is spread through touching a contaminated surface. If your rabbit has ringworm, petting them and then touching your own skin can cause the rash to spread. The opposite is true as well. If you or any of your other pets contract ringworm, it can also be passed on to your pet rabbit through touch.

E. Cuniculi is a fungal parasite that can cause very dangerous and severe symptoms in rabbits. It can cause neurological disorders and paralysis in rabbits. However it is also present in many rabbits who are healthy and show no symptoms at all.

The effect on humans and other pets is less understood. In most cases it does not cause any serious illness, but it has been known to pass from infected rabbit urine to humans and other mammals. However there is little chance of becoming seriously ill unless you are immunocompromised.

How E. cuniculi is spread

Rabbits can transmit E. cuniculi through spores in their urine. A mother rabbit can also also transmit it to her babies during pregnancy.

Rabies is a viral disease that attacks the central nervous system. Rabies is very deadly, and once a person shows clinical symptoms, such as fear, vomiting, confusion, and excess salivation, it is very likely to cause death.

How rabies is spread

Rabies is another disease that rabbits can technically catch and carry, but the chances of contracting rabies from a rabbit are negligible, whether domestic or wild. In fact, there are no confirmed cases of transmission from a rabbit to a human.

This is because rabies is spread through saliva transferred through bites and scratches from an infected animal. Most of the time a rabbit would be killed outright and not have the chance to pass on the disease.

Theoretically if a rabbit were to get attacked and injured through a hutch gate, but not killed, they could subsequently bite or scratch a person and spread rabies. Bats could also bite wild rabbits who could then spread the virus, but again, this is all theoretical because there have not been any recorded cases of transmission from rabbit to human.

Tetanus is caused when toxic levels of bacteria enter the body, usually through a deep cut or serious wound. It attacks the nervous system, causing muscle contractions and can even affect a person’s ability to breathe. There is no cure for tetanus, but it can be prevented with a vaccine.

How tetanus is spread

While animal bites are not the main cause of tetanus infections, they can sometimes lead to them. Especially if it’s a very serious animal bite. Rabbit bites are no exception. Since their teeth can create deep puncture wounds (sometimes all the way to the bone), these bites have the potential to cause a tetanus infection in someone who is not vaccinated.

The good news is that a vaccine already exists to prevent these dangerous infections. Most people will be vaccinated against it in childhood. Then as adults we only need to make sure to get a booster tetanus shot every 10 years to maintain immunity.

Snuffles is an upper respiratory bacterial infection that causes cold-like symptoms in rabbits. If the symptoms are left untreated, then it can be a life threatening condition for rabbits, but many rabbits also carry the bacteria in their nasal passage without showing active symptoms.

Most commonly Snuffles is caused by the bacteria Pasteurella multocida. If a person is bitten by a rabbit carrying this bacteria, the wound could potentially become infected. However, a severe infection from a rabbit bite is uncommon.

Another bacteria that causes symptoms of Snuffles in rabbits is Bordetella bronchiseptica. This bacteria can cause dogs to develop kennel cough. It can also be passed on to guinea pigs and cause serious illness. Since rabbits can carry this bacteria without showing any clinical signs, it’s usually best to keep rabbits and guinea pigs separate to prevent transmission.

How snuffles is spread

Snuffles is very contagious and can be spread through contact with an infected animal or objects that they touch. It can also cause bacterial infections if the saliva enters into an open cut, such as a bite wound.

Learn more about the dangers of snuffles in rabbits.

Diseases and infections that are contagious to rabbits

Rabbits can carry some diseases, but they are not likely to spread to humans. However there are some illnesses and infestations that are more likely to be passed from humans and other household pets to rabbits.

How to prevent the spread of diseases from a pet rabbit

Though the chances are small that you will catch a disease from your pet rabbit, it’s still best to take basic precautions to prevent the spread of potential illnesses. This will help to protect you and those who are immunocompromised in your life, and it will also help to protect your rabbit from diseases that can spread to them.

Rabbits are wonderful pets who usually love to be pet while snuggling safely on the floor. If you want them to cuddle in your lap, though, many rabbits will protest. They are not quick to trust any... 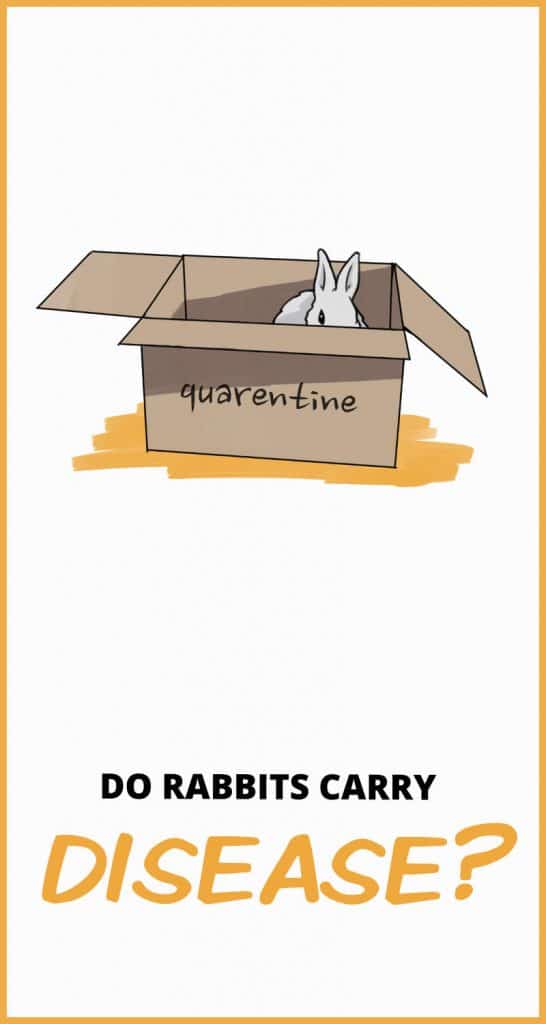