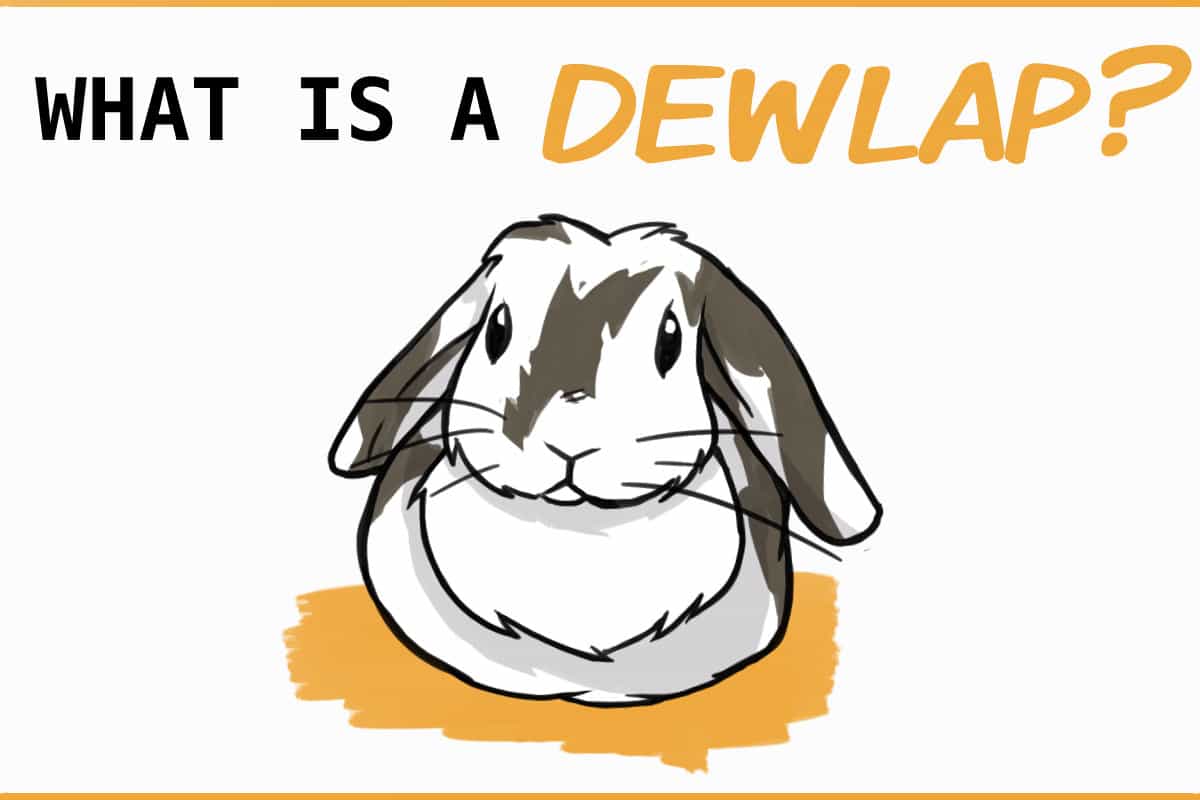 If you’ve seen many rabbit photos around the internet (who hasn’t), you may have noticed that some bunnies have a weird looking bump under their chin. You may be wondering if there’s something medically wrong with these rabbits. Or maybe it’s extra fat that has developed into a rabbit double chin. The reality is, it’s neither. This big pouch of fur under a rabbit’s chin is known as a Dewlap.

A dewlap is a pouch of fat beneath the jaw of a female rabbit, especially if they were not spayed early. The appearance can be anywhere from a small bump under the rabbit’s chin, to a large pillow around their neck. Dewlaps are more prominent in large breeds and lop eared rabbits. Male rabbits of these breeds may also develop small dewlaps.

It’s perfectly normal for a female rabbit to have a dewlap, but why does it exist. Do rabbits with larger dewlaps attract better mates? or is there some other reason that that this feature has become part of a rabbits anatomy.

The characteristics of a dewlap

At its most basic, a dewlap looks like a bump under a rabbit’s chin. Small versions will look similar to a double chin, or may be difficult to notice at all. Larger dewlaps can form all the way around a rabbits head, and look like a comfortable little pillow for them.

For the most part, only mature female rabbits will develop pronounced dewlaps. It is possible for the occasional male rabbit to also have a dewlap, but for most rabbit breeds, it’s not particularly common.

Dewlaps are much more distinctive in larger breeds of rabbits. Flemish Giants, the largest rabbit breed, tend to have particularly impressive dewlaps. Lop rabbits also have a tendency to have larger dewlaps than their uppity-eared counterparts.

Why do rabbits have dewlaps?

Female rabbits develop dewlaps to help when it comes time to make a nest for babies. They have nothing to do with attracting mates and there is no evidence that male rabbits prefer a doe with a larger dewlap.

When a rabbit is pregnant, she will start to make a nest for her soon-to-be babies. The doe will pull their own fur from the dewlap, as well as their forelegs and chest, to have more material to add to their nest.

It could be a little unnerving to see a rabbit plucking at her own fur, but if you notice this behavior in an unspayed rabbit, it’s nothing to worry about. However, the rabbit should not remove so much fur from her dewlap that it starts to have large balding spots.

If you notice this excessive pulling of fur, especially if it is leading to damaged skin underneath, then this is a health concern. In this case, you should take your bun to a rabbit-savvy vet for advice.

Unspayed rabbits will also sometimes have false pregnancies. This is when a rabbit is in heat and starts plucking her fur to start nesting even though she is not pregnant. So even if there are no male rabbits in the house, and therefore no chance of rabbit babies, you may still witness this behavior.

When does a dewlap develop?

A female rabbit is not born with a dewlap. She won’t even start to develop a dewlap until she reaches sexual maturity. At that point it will start to grow. But the dewlap won’t reach it full size for another year or two.

Most breeds of rabbit will reach sexual maturity right around four to six months old. If the rabbit is not spayed at this point, the dewlap will start to appear and slowly increase in size over the next few years. The final size of the doe’s dewlap is mostly based on genetics. So it may end up being very small or it may become large and pillow-like.

Sometimes a dewlap may noticeably increase in size when a rabbit becomes pregnant, or during a false pregnancy. This is not always the case though. If a rabbit’s dewlap seems to be getting rapidly bigger, it’s best to have it checked by a veterinarian to make sure there are no cancerous lumps.

Can a rabbit’s dewlap be too big?

In general, a dewlap is a perfectly normal and healthy sign in a female rabbit. But a very large dewlap could pose a problem for your rabbit. Very large dewlaps make it difficult for rabbits to groom themselves. Most rabbits are very good at cleaning themselves, but you may have to put a little extra effort into helping these girls have clean and un-matted fur.

It can also become difficult for rabbits with extra large dewlaps to eat and drink without getting matted fur and debris stuck into their dewlap. If this happens the rabbit could suffer from skin irritation or get an infection. It can be helpful to give these rabbits a large rodent water bottle, instead of a bowl, to drink from. In very extreme cases you may have to talk to your vet about the possibility of having a dewlap reduction surgery for your rabbit.

Extra large dewlaps can also be a sign that your rabbit is actually overweight. The dewlap is a flap of skin filled with fatty tissue, so as your rabbit gains weight, the dewlap will also increase in size. If your rabbit’s dewlap is too big because of obesity, then you will need to adjust your rabbit’s diet.

What if my female rabbit doesn’t have a dewlap?

Young rabbits also do not have dewlaps. They don’t start to develop until the doe reaches sexual maturity, at about four to six months. So if your rabbit is only a year old or less, she probably won’t have developed one yet.

Female rabbits that are spayed at an early age also tend to have small or non-existent dewlaps. A dewlap won’t reduce in size after the rabbit has been spayed, but it will generally slow down and stop getting bigger.

So if your rabbit is spayed when she is six months to one year old (which is recommended), she probably won’t end up developing much of dewlap.

Why does my male rabbit have a dewlap?

If your male rabbit has a dewlap, it can be an indicator that your rabbit is a little overweight. All rabbits have the genetic ability to form a dewlap, but it’s not necessary for male rabbits to have a dewlap for nesting. So when a male rabbit starts to gain weight, the fatty tissue in the chin and neck area will start to build up and the elastic skin in that area will form a dewlap.

If this occurs, you will want to try to get your rabbit onto a healthier diet. Their main food should be grass based hay. Pellets and sugary treats should only take up a small portion of their diet.

It’s also important to check to be sure the lump that appears to be a dewlap is not actually cancerous. If you are concerned that the dewlap is not due to your rabbits weight, bring him to the vet to get him checked out.

There are some breeds of rabbit, especially larger breeds, where the males do also develop dewlaps. This is called a pencil line, and it just looks like a small dewlap. So if you have a large rabbit or a lop rabbit, this is not necessarily a sign that your rabbit is overweight. It’s still a good idea to check with your vet to make sure your rabbit is at a healthy weight though.

Like with many other species of pets, rabbits are judged in shows for showmanship skills and breed standards. Interestingly, there are seven breeds of small sized rabbits that would be completely disqualified from the show if they have a dewlap. But in larger breeds it’s perfectly normal and accepted as a breed standard.

What is a healthy weight for a rabbit?

A normal adult rabbit weight can span from about 2 pounds to about 12 pounds. The Flemish Giant breed is an outlier and can weigh in around 20 pounds or more. The healthy weight of your rabbit will depend on their breed and the way their body fat is dispersed throughout their bodies.

How to know if your rabbit is pregnant?

If a rabbit is pregnant, she will begin to lose interest in, or even attack, other rabbits in the area. She will also begin nesting by collected bits of paper and hay, and pulling fur from her own dewlap and chest. You may also be able to feel marble-like lumps if you gently touch her abdomen.

Should I get my rabbit spayed?

It is recommended that you get your rabbit spayed once they reach sexual maturity at four to six months. If you don’t, your rabbit is likely to develop health complications, such as uterine or ovarian cancer. 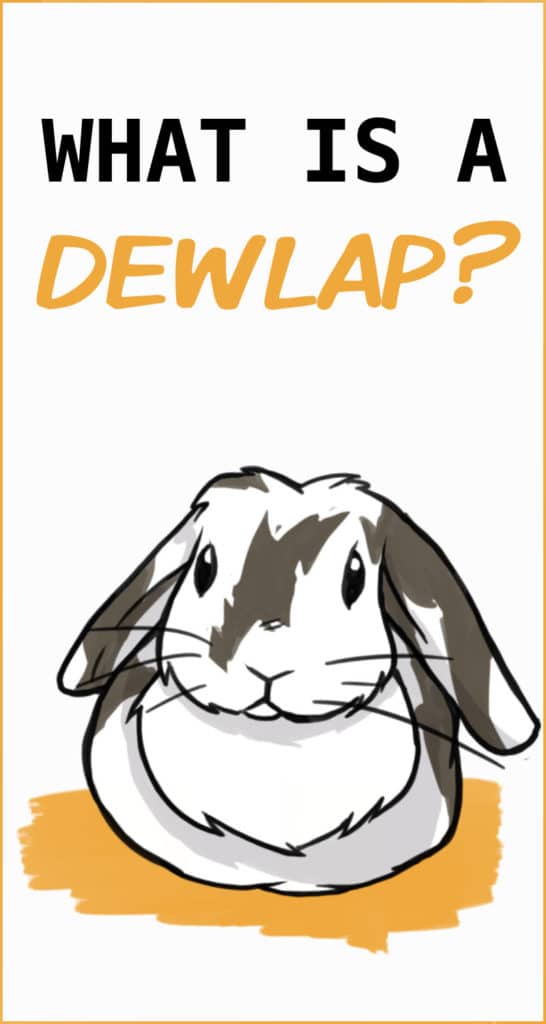