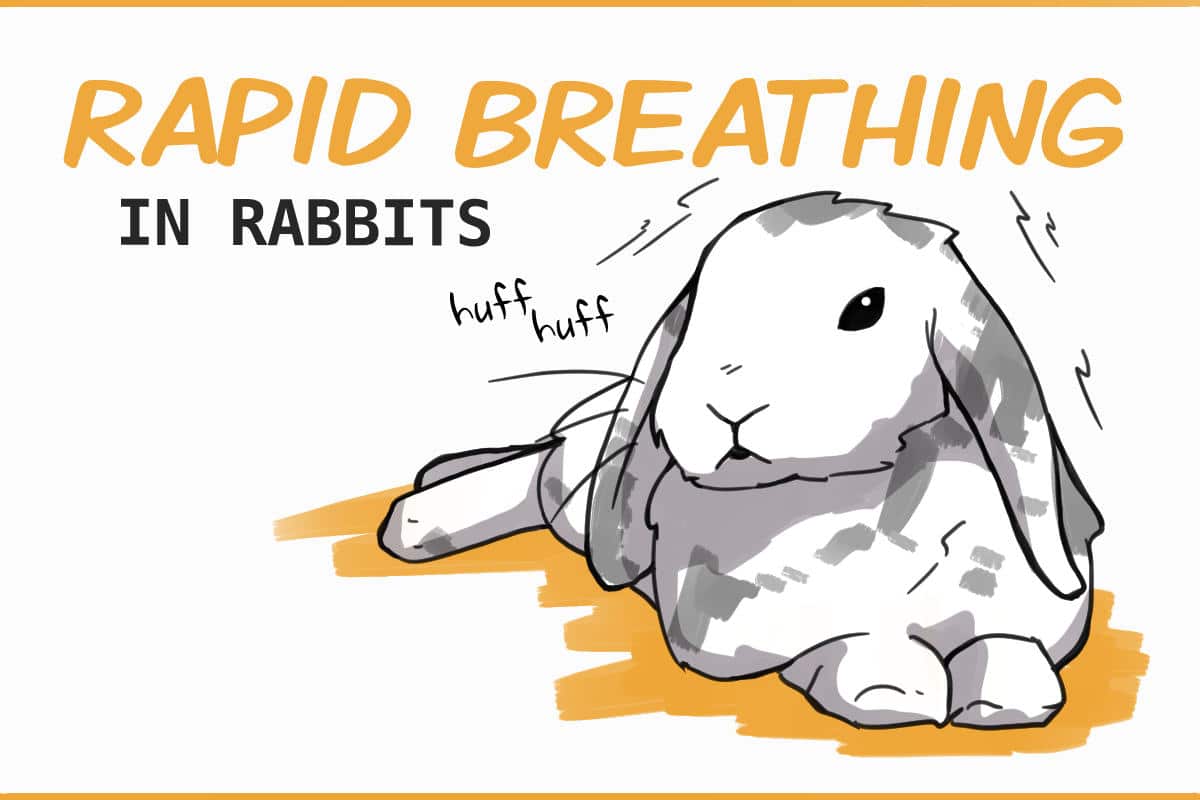 Rabbits breathe much faster than humans do. What appears to be very fast breathing, may just be the normal respiratory rate of your rabbit. Despite that, it is important to be aware that there are times a rabbit’s rapid breathing can be a symptom of illness. It’s always beneficial to learn how to tell the difference between normal rabbit breathing patterns, and unhealthy rapid breathing.

When they are at rest, rabbits will take a breath every one to two seconds. High activity levels and hot weather conditions can increase a rabbit’s breathing rate further. You only need to seek medical attention when fast-breathing is accompanied by other symptoms or if the breathing rate does not return to normal after a period of rest.

In most cases, there is little to worry about a rabbit’s fast breathing. They often breathe so fast that it makes their whole body appear to be shaking or shivering. This is especially the case if your rabbit had a fun zoom around the room. However, rapid breathing accompanied by wheezing or other seemingly unrelated symptoms, such as not eating, can be the sign of a respiratory illness or a high level of stress.

The fast does a healthy rabbit breathe?

Rapid breathing can be a sign of illness in rabbits, but rabbits normally breathe pretty quickly even when they are not in any distress. A healthy rabbit will have a breathing rate of 30-60 breaths per minute when they are at rest.

For context, we humans typically only have a rate of 12-16 breaths per minute. That means even a slow breathing rabbit will take twice as many breaths as we do. It’s also perfectly normal for rabbits to breathe four to five times as fast, taking a breath every second.

Sometimes this normal fast breathing will be enough to make a rabbit appear to be shaking a little bit. I find this is especially true with smaller breeds of rabbits. Many people who are new to rabbit care are alarmed when this happens, but in most cases this is normal and there is nothing to worry about.

How to check your rabbit’s breathing rate

It is important to remember that this will be the rabbits breathing rate when they are at rest. They should be relaxed and laying down, not in the middle of play time. When you check to make sure your rabbit isn’t breathing too rapidly, you’ll want to take this into account.

If you’re having trouble watching your rabbit to know when they are breathing in and out, try gently placing your hand on your rabbit’s side. You should be able to feel the rise and fall of your rabbit’s breathing a little better to help you count the breaths.

When is it typical for a rabbit to breathe faster that usual?

While it is typical for a rabbit to breathe every one to two seconds when they are at rest, there are occasions when you will see your rabbit’s respiratory rate increase. This can be alarming because rabbits are capable of breathing very fast, to the point where it looks like they are vibrating. However, this is not always a problem. A rabbit’s breathing rate can increase temporarily for many reasons, some of which are entirely normal and others that can clue you in to your rabbit’s condition.

During and after exercise

Like with people, exercise will quickly increase the breathing rate of any rabbit. It’s common to see a rabbit breathing very quickly when they lay down after zooming around the room. It can take them a number of minutes before they are able to catch their breath and slow down their breathing.

Some rabbits, especially young rabbits, will get excited and get up again before they’ve completely calmed down, making it look like they always have rapid breathing, when really they are maintaining a higher level of activity.

When they are afraid

Fear, anxiety, and stress are also factors that cause a rabbit’s breathing rate to increase. It’s possible for them to become so terrified that they appear to be hyperventilating.

Short bouts of fear or stress are nearly impossible to prevent, so you are likely to see rapid breathing that is due to fear at some point in your rabbit’s life. As long as your rabbit is able to recover quickly and calm down, this is nothing to worry about. However prolonged periods of stress should be taken seriously since they can cause illness in rabbits.

This rapid breathing will often appear alongside other signs of fear in rabbits, including:

If your rabbit is frequently stressed or scared for long periods of time, then you might want to consider making some changes to their environment to help them overcome their anxiety. Learn what you can do to help your rabbit.

When they are not feeling well

Rabbits may also breathe fast as a result of pain. If they are injured or feeling discomfort from another illness, such as GI Stasis, you might see them breathing rapidly even though they are at rest. If your rabbit is inexplicably breathing much faster than they should be for long periods of time, then it’s a good idea to get them checked out with your vet.

Respiratory illnesses can also alter a rabbit’s breathing. It may cause them to breathe faster than usual, but more likely you will notice labored breathing instead. You might hear a wheezing sound as your rabbit breathes or notice your rabbit’s mouth is open when they are breathing. These are signs that your rabbit is struggling to get enough air, and an emergency appointment should be made with your vet as soon as possible.

If they are feeling hot

When rabbits breathe, the air going through their nasal passageway is able to help them regulate their body temperature. They can transfer heat into the tiny water droplets that they expel when they exhale. The faster a rabbit breaths the more their bodies are able to get rid of excess body heat, keeping them from overheating.

If your rabbit is breathing fast because they are hot, it’s a good indication that you should try to find a cooler area for them. The hotter a rabbit gets, the less able they are to regulate their body temperature. They become more susceptible to heat stroke, so it’s worth getting your rabbit out of the sun or into a cooler part of the house if you notice rapid breathing on a hot day.

When to seek medical attention for your rabbit

In most cases, rapid breathing in rabbits will slow down to normal levels on their own within a short amount of time. A fast breathing rate that is the result of exercise, temporary anxiety, or heat will often be able to resolve itself without the need of medical attention. However, since it is possible for pain and illness to cause rapid breathing, there are occasions when you should seek the advice of a medical professional.

Most of the time, a rapidly breathing rabbit will calm down within 5-10 minutes. Even rabbits that are experiencing temporary anxiety will often be able to calm down a little within half an hour. If their breathing rate remains much too fast for longer than this period of time, it’s a good idea to seek the advice of your veterinarian.

Give them a call to make an appointment for your rabbit to make sure there are no underlying illnesses that need to be addressed. Your veterinarian can also give you advice for how to help a rabbit who is overly stressed all the time.

When the fast breathing is accompanied by other signs of illness

If your rabbit is breathing very rapidly and you notice other common signs of illness, it’s time to bring your rabbit in for medical attention. If you’re worried, you can even check your rabbit’s pulse or attempt to take their temperature.

Common signs of illness in rabbits include:

link to How to Detect and Prevent GI Stasis in Rabbits

One of the scariest parts of being a rabbit caretaker is when our pet rabbits get sick. Rabbits have a knack for hiding their illnesses, which means they often goes unnoticed until the rabbit is very...

Continue Reading
link to The Complete Guide to Bonding Rabbits