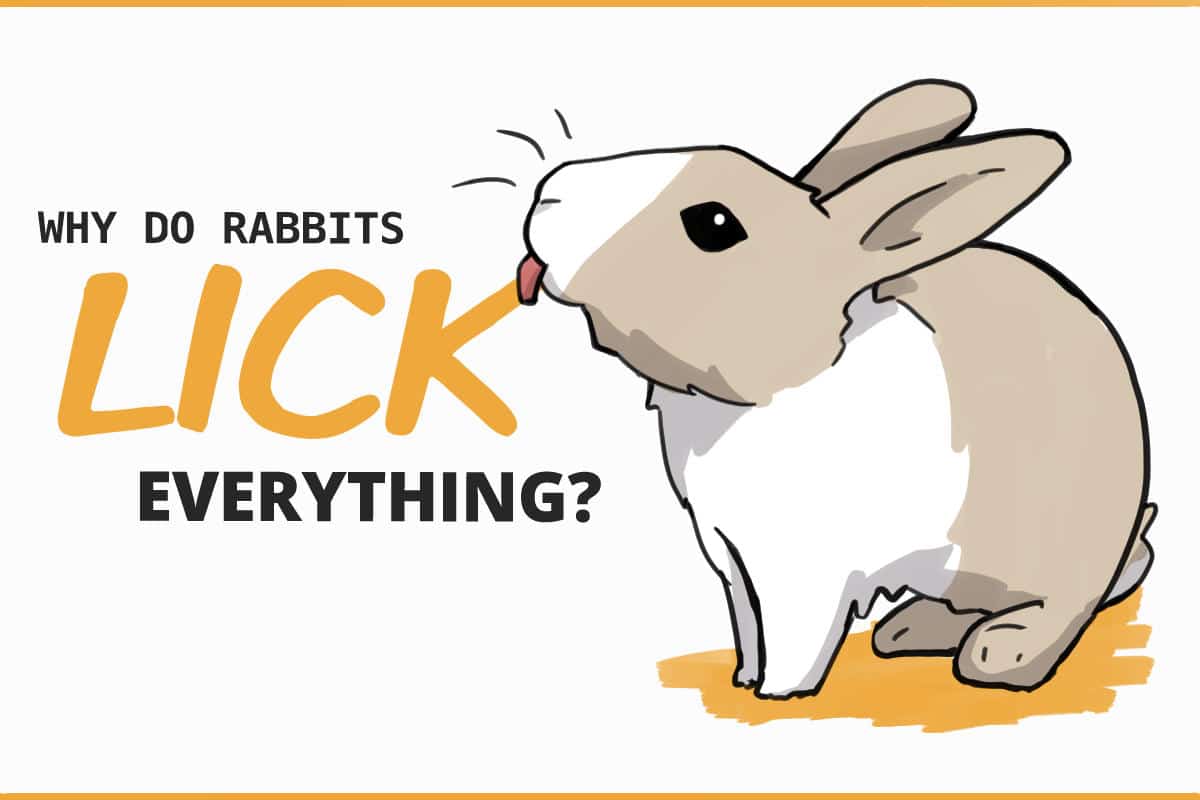 One thing I’ve noticed about my rabbit, Elusive, is that she likes to lick everything. She likes to lick my office chair, my pillow, my sweatshirt. Elusive even loves to lick the floor when she’s sprawled out. If you’re in a similar situation, you may be wondering if there is some kind of health concern for rabbits who lick too much. Good news! Rabbit licking behaviors are perfectly normal and are only very rarely cause for concern.

Licking is an instinctual behavior in rabbits. Most of the time rabbits will lick people or objects as a way to claim dominance or show affection. The scent of people on blankets, pillows, sofas and so on can make your rabbit want to lick these objects. Other rabbits will enjoy licking specific textures of material, such as leather, carpet, or velvet.

Because rabbits don’t have hands like us, they use their mouths to explore the world around them. Their whiskers, teeth, and tongues are used to find objects and test many different tastes and textures. Some rabbits like exploring with their mouths so much that they lick everything they come across. Most of the time, this is perfectly normal, but it’s also important to be on the lookout for excessive licking in grooming behaviors, and licking that may be a result of boredom or anxiety.

Is it normal for rabbits to lick a lot?

Like digging and chewing, licking is an instinctual behavior for rabbits, but some will be more prone to lick than others. It’s a normal behavior that helps them interact with their environment.

Rabbits like to lick all kinds of objects around them, including people. You may find that your rabbit prefers to lick some types of objects more than others. For example, some rabbits will spend a lot of time licking the carpet, while others have a specific spot on the couch that they love to lick. Other rabbits will only lick people or their clothing, while others will lick everything except people.

It all depends on the personality of your bunny. All of these behaviors are perfectly normal for rabbits. The only times that there is any cause for concern is if your rabbit causes bald spots on themself or their bonded partner by over-grooming or if your rabbit seems to be licking everything as a result of anxiety or boredom.

Is licking dangerous to rabbits?

Not only is this a normal rabbit behavior, but there is also very little potential for harm or destruction. Rabbit chewing and digging behaviors can lead to damaged carpets, baseboards, and furniture, but licking is only going to cause a temporary wet spot on the furniture or floor. There’s really only a danger if your rabbit tries to lick something that has a dangerous chemical residue.

For example, if your rabbit tries to lick the floor directly after you mopped it. For this reason it’s best to either use a pet-safe cleaner (such as Puracy), or keep your rabbit away from any place that you’ve cleaned for at least a few hours.

There are some theories that rabbits who lick pillows because of the salt from human sweat are salt deficient. There has been very little research done about the amount of salt a rabbit needs in their daily diet, but there also hasn’t been any evidence that domestic rabbits with healthy diets suffer from any kind of salt deficiency. This means that if your rabbit is licking your pillow because of the sweat, they might like the flavor of the salt, but it’s unlikely that there are any health concerns that you should be worried about.

Like chinning (when rabbits rub their chin on an object), licking is one way for rabbits to claim their territory. Usually this occurs when rabbits give a few licks to a number of objects in the area. You’ll notice this behavior especially if your rabbit is in a new place or there are new objects in the room. Licking in this way helps to spread the rabbit’s scent, which is what rabbits do to try to claim ownership of the area.

Rabbits also use their tongue to groom themselves and others. They are actually very clean animals who spend a lot of time self-grooming to keep their coats nice and shiny. Rabbits in pairs will even help out their fellow bonded friends by licking and grooming them too! It’s a common behavior in rabbits and is a good signal that the pair continue to see each other as friends.

Grooming another rabbit is a way that these animals show affection for one another. It’s a way for rabbits to show others that they care about their upkeep and cleanliness. Typically there will be a dominant rabbit who is on the receiving end of grooming much more often than the subordinate rabbit. If the dominant rabbit gives a couple of licks to the subordinate, then that’s a rare gift depending on the nature of the pair’s relationship.

If bonded rabbits get into a small fight or get upset at each other, a lick on the forehead is often a way to signal that the fight is over and all is forgiven and forgotten. Because, of course, rabbits wouldn’t groom each other if they were still angry.

Because rabbits are such clean animals, you will notice them cleaning themselves by licking all over. If you spend a lot of time with your rabbit, you’ll notice that they tend to have long self-grooming sessions a number of times a day. It is perfectly normal for rabbits to spend a good portion of their days licking themselves this way and is rarely cause for concern.

The only times grooming behaviors are anything to worry about is when your rabbit licks so much that they cause bald spots. They may also end up causing bald spots on their bonded bunny if they groom their partner too much.

This overgrooming can happen because of excessive stress, anxiety or boredom. If your rabbit is anxious they can comfort themselves by self-grooming or licking their partner. It’s also a way to alleviate boredom because it gives the rabbit something to do.

Why does your rabbit lick you?

Most of the time rabbits lick people for the same reasons that they lick other rabbits, to groom you! It’s a way that rabbits can show affection for their people and let you know they love you and care about your cleanliness. I find that rabbits especially like to lick people on the face and forehead when they try to groom them like this, since that’s close to how bonded rabbits behave in pairs.

Rabbits might also lick your clothing to offer the same kind of affection. Your clothes smell like you, so your rabbit licks them in an attempt to groom you and show that they care. Don’t be surprised if you accidentally get nipped by your rabbit too. They may come across a seam in your clothing and think it’s something like matted fur that they need to remove with their teeth.

In other scenarios, a rabbit may lick you or your hand because they like the flavor of it. You may have the residue of some kind of yummy treat on your hand, which makes your rabbit love to lick it. Some rabbits also just like the taste of salt, which is found in our sweat. They’ll lick us, especially the palms of our hands, for that flavor.

Why do rabbits lick pillows, floors, sofas and other objects?

The behavior that often causes caretakers the most concern is when rabbits start obsessively licking objects. They’ll spend a lot of time sitting and licking things, such as pillow, sofas, blankets, carpet, and other common household objects (my rabbit even likes to lick the cover of my laptop computer!). It’s actually just a fun activity for rabbits.

While this isn’t common behavior among all rabbits, it’s not unusual by any means and isn’t a cause for concern at all. We don’t know exactly why these rabbits like licking everything, in the same way we don’t know why some rabbits insist on chewing up everything they come across. It’s simply a natural rabbit behavior, and it doesn’t cause any harm in allowing your rabbit to continue.

When is licking caused by boredom or anxiety?

Sometimes excessive licking behaviors are caused by boredom or anxiety. This is more likely to show up in obsessive self-grooming behaviors, when your rabbit grooms themself so much that they start to develop bald patches. However they might also be licking other objects as a way to comfort their anxiety or give themselves something to do when they are bored.

You can know the difference between licking because it’s a fun activity and licking because your rabbit is bored or anxious by looking at the rest of their body language.

If your rabbit typically shows signs that they are happy, such as binkying and zooming around the room, then this behavior is nothing to worry about at all. If they are showing symptoms of being scared or frustrated, then you may want to find the root cause of the licking behavior so you can make sure your rabbit is happy.

Behaviors that indicate your rabbit is happy and confident:

Behaviors that indicate your rabbit is bored or anxious:

One quirk I’ve noticed with my rabbit, Elusive, is that she tends to drink large amounts after she’s spent a lot of time licking everything, especially the sofa or a pillow. Excessive drinking is something that can be a sign of liver damage in rabbits, so at first I was a little concerned about Elusive’s drinking habits.

But once I recognized the pattern that licking a lot lead to drinking a lot, I realized that her drinking was nothing to worry about. She was just using up her saliva making a wet spot on the sofa for me to sit in. She also may have been getting a little bit of salt from licking my pillow which is also known to increase water retention in animals. Drinking more was just a logical result of licking everything.