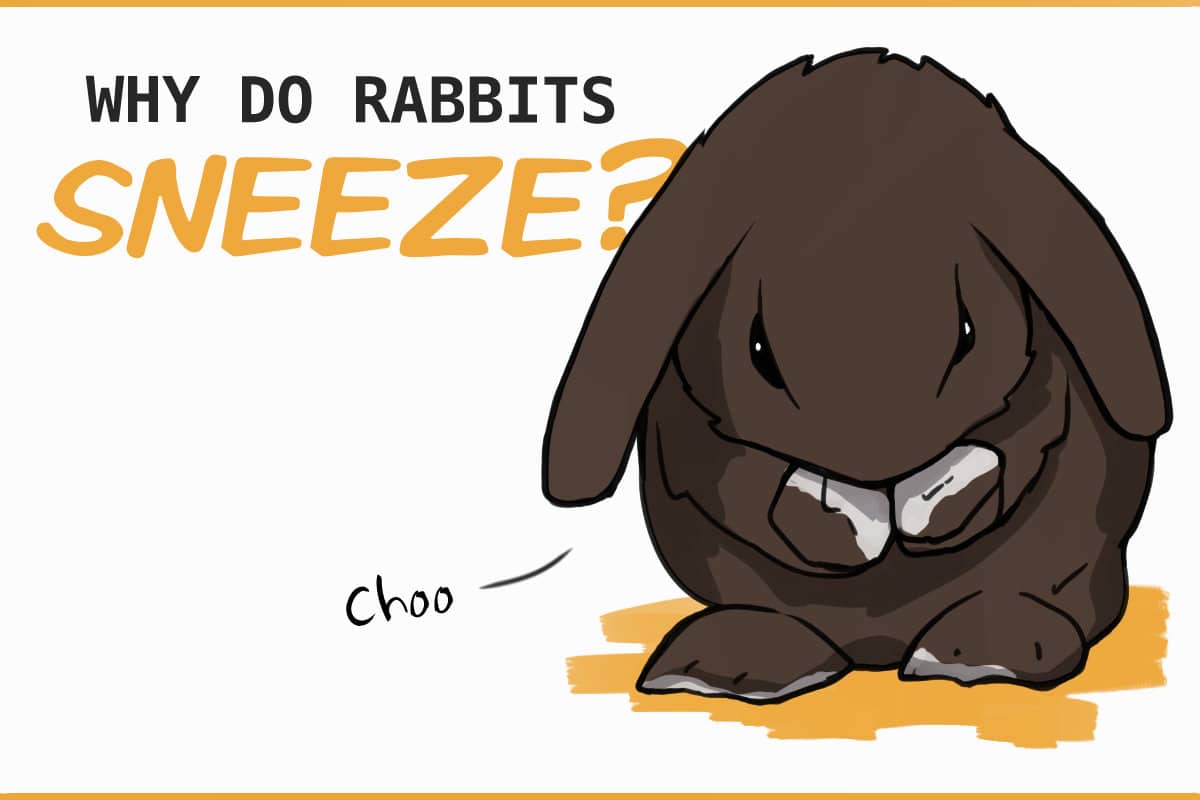 Have you ever heard a rabbit sneeze? It’s one of the cutest sounds that a rabbit makes and is inevitably followed by an adorable face washing with their front paws. However, rabbit sneezes are not all cute. Rabbits will sneeze for a number of reasons, some of which are much more concerning than others.

Sometimes the sneeze is simply a result of dust, smoke, or allergies that caused irritation in your rabbit’s nose. However, frequent sneezing in rabbits should not be taken lightly, because it can also be a sign of a serious respiratory infection that can become fatal if it’s not treated early.

While you certainly don’t need to be worried about the occasional sneeze from your pet rabbit, you do want to be sure to pay attention if they are sneezing frequently. You can look for the signs of a dangerous respiratory infection so you can help your rabbit feel better quickly. You can also pay attention to your rabbit’s environment, since high amounts of dust or strong scents can also cause frequent sneezing.

Why do rabbits sneeze?

Rabbits will sneeze because their nasal passage becomes irritated. This can happen because an external object, such as a small particle of dust, makes its way up the rabbit’s nose. Their nose can also be irritated from an internal infection or build-up of mucus in the nasal passage.

Rabbit noses are pretty delicate and sensitive. Even small irritants can end up causing a rabbit to go off in an adorable sneezing fit. Let’s look at some of the most common causes of sneezing in rabbits to help you determine why your rabbit is sneezing.

When to be concerned about rabbit sneezes

A rabbit who occasionally sneezes is really nothing to be worried about. It’s possible that there was just some dust in their environment that managed to irritate the rabbit’s little nose. However, you don’t want to completely ignore your rabbit’s sneezes. There are occasions when this behavior is actually a symptom of a much larger health problem.

If your rabbit’s sneezing is accompanied by the following symptoms, it’s a good idea to take them to a vet for a checkup. Your vet can help determine if your rabbit has a respiratory infection that needs medical treatment.

If your rabbit seems to be sneezing all the time, then that may be a sign of a more serious issue. This is especially true if the sneezing is accompanied by any kind of nasal discharge or snot. Frequent dry sneezes could be an early sign of a respiratory infection, but they can also be a sign of allergies in your rabbit. It’s one of those symptoms that is better to get checked out just in case.

Some rabbits snore on a regular basis even when they do not have any health problems. What you want to look out for is a rabbit who did not snore previously, but suddenly started snoring when they began sneezing a lot. This is an indication of a respiratory obstruction and may mean that the rabbit’s nasal passageway is blocked by mucus or an external object.

3. Sneezes that are accompanied by snot

It’s actually very dangerous for a rabbit to have a snotty nose. They are obligate nasal breathers, making it incredibly difficult for rabbits to breathe through their mouth. If snot blocks the nasal passageway, it can lead to difficulty breathing in rabbits. Snuffles, a common respiratory infection, will typically start with a watery discharge when your rabbit sneezes. As the illness progresses, it will develop into a thicker mucous that poses a greater danger for a rabbit’s breathing.

If your rabbit starts sneezing a lot and also has less energy than usual, this is a sign that they may be getting sick. Different rabbits will normally have different levels of energy, so you’ll have to keep an eye on your rabbit’s unique behaviors. If they are usually energetic but no longer want to play at the usual times of day, then it’s worth bringing them in for a checkup.

6. Head tilt or problems with balance

Head tilt is a condition in rabbits that causes them to tilt their head 90º to the side at all times. It is associated with a loss of balance in rabbits. Both head tilt and a general loss of balance can be caused by many things, including stroke, cancer, and ear infections. Respiratory infections can also end up causing these imbalances. Even if there are no other symptoms present, if your rabbit develops head tilt, you should seek veterinary care.

Rabbits have a sensitive digestive system and need to be eating frequently throughout the day. Most rabbits will be happy to gobble up their food and some yummy leafy greens. But when they start to get sick, these rabbits who are normally so enthusiastic about food will suddenly avoid eating.

A loss of appetite can be a symptom of any number of rabbit illnesses and should not be overlooked. If your rabbit is completely refusing to eat, then you should treat it as an emergency situation and bring your rabbit to the vet as soon as possible.

Signs that your rabbit is having difficulty breathing include wheezing, coughing, attempted mouth breathing, and a whistle or snoring sound when they are breathing. These are indications that there is something obstructing your rabbit’s nasal passage. If your rabbit is also sneezing, then it’s possible that this obstruction is an excessive amount of mucous.

If you notice your rabbit is drooling, this is an indication that your rabbit is attempting to breathe through their mouth. It may mean that your rabbit’s nasal passage is blocked and they have a respiratory infection. Other causes of drooling include overgrown rabbit teeth, which is also a serious condition in rabbits. So if you notice this behavior, you’ll want to make an appointment with your vet.

10. Matted fur on the inside of the paws

Sometimes when a rabbit sneezes it can be difficult to know if there was any snot because the rabbit washes their face immediately afterward. Instead you will see signs of any nasal discharge on the inner side of the rabbit’s paws. Look for sticky and matted fur on this area to help you determine if your rabbit’s sneezes are really free from snot.

Should you take your rabbit to the vet if they sneeze

If you take your rabbit to the vet every single time they sneeze, you’ll inevitably be making frequent trips. Like humans and other animals, rabbits can sneeze for many reasons, even if they are not sick. If your rabbit’s sneezes are not accompanied by other symptoms that indicate a respiratory illness, then they are probably okay and don’t need to see the vet.

However, if you are ever in doubt and worried about your rabbit’s health, it’s always a good idea to seek the advice of a professional. If your rabbit is sick you’ll be able to catch the illness early, giving your rabbit a much better chance of recovering quickly.

Some rabbits sneeze a lot even if they are feeling okay. Growing up, my family had one rabbit, Muffin, who was known to sneeze all the time even though he had no known health problems. While it’s a good idea to check with your vet just to be sure there is no health problem, sometimes frequent sneezing is just a part of a rabbit’s unique personality.

Other steps you can take to help your rabbit stop sneezing

If your rabbit is not sneezing because of a respiratory infection or medical problem, you can, of course, try to make some changes to their environment to see if that reduces the amount that your rabbit sneezes. You can try to remove sources of dust or allergens that would cause a rabbit to sneeze more frequently. This can help to relieve your rabbit and prevent annoying nose irritation.

link to 7 Essential Supplies for a Rabbit Enclosure

Moving to a new home can be pretty stressful as is. Adding a rabbit into the mix can make anyone’s head spin. How do you keep your rabbit from getting scared? And how can you safely bring your... 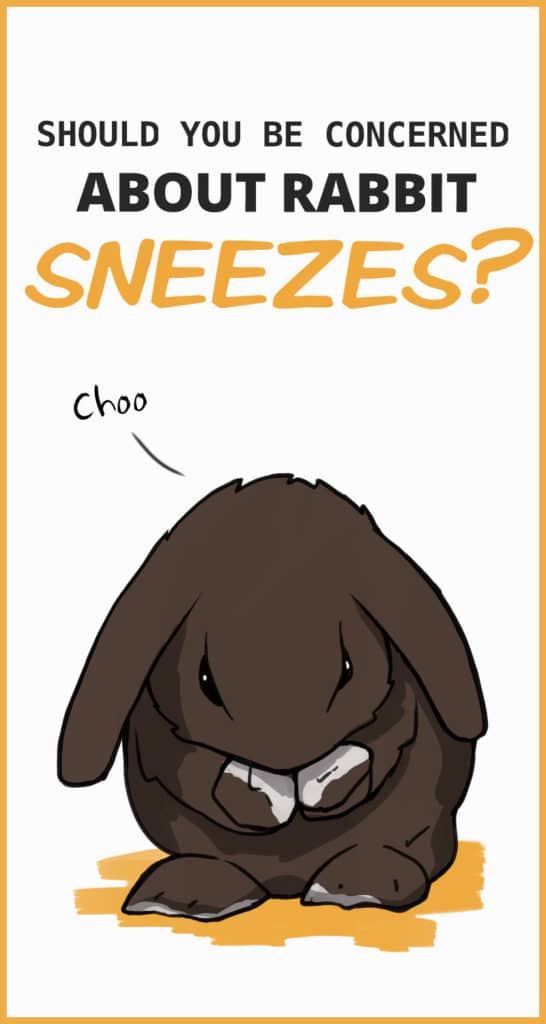