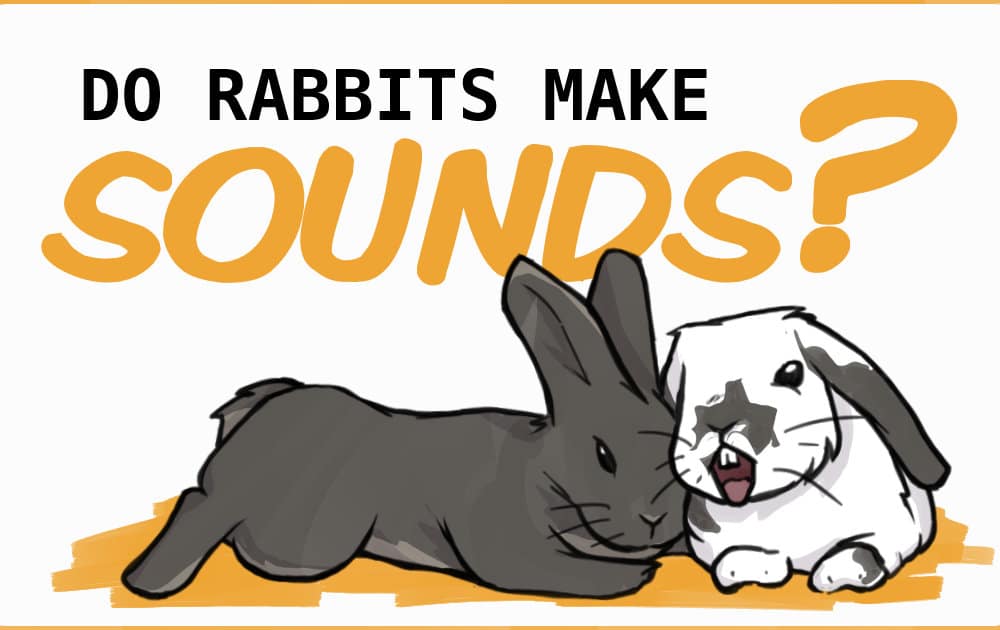 Rabbits are very quiet pets to have. They don’t bark like dogs or meow at you when they’re annoyed. Rabbits mostly communicate with us through their body language.

But what kind of noises does a bunny make?

Rabbit sounds are generally very quiet and easily missed. Even if you spend a lot of time with a pet rabbit, you might not know what all the noises are or what they mean. What is your rabbit trying to tell you with all of the quiet little sounds they make?

What sounds do rabbits make when they’re happy?

Let’s start with the happy sounds. We all want to know that our sweet rabbit is happy and content with life. Sometimes they make some noises to let us know exactly how excited they are. And sometimes, like cats, they let us know how content by purring when they are being pet.

Rabbit honking is an interesting noise. It sounds a little like your rabbit is snorting or oinking. This is a great example of a happy honking rabbit. In my experience, rabbits will make this sound when they expect a treat, or when they are just happy to see you. The sound is often accompanied by begging behavior (like this), as your rabbit is very excited about getting that treat.

Rabbit purring is not the same as a cat’s purr, but it means the same thing. When a rabbit is calm and content, they will gently grind their teeth together. Here’s a great example for you. Most often, you will notice this sound when you are petting your rabbit, but occasionally you might also see them purring when they are relaxing on their own.

Sometimes this is difficult to hear unless you put your face very close to your rabbit, but if you can’t hear it, you can feel your rabbit’s head vibrate when you’re petting them. You can also see their whiskers twitching a little as your rabbit happily grinds their teeth.

A word of caution. There is another sound rabbits make that is very similar to their purring but means the exact opposite. When your rabbit is very loudly grinding their teeth together it is an indication that they are uncomfortable or in pain. This is much less common and is more of a grating sound. The rabbit’s body language will also reflect their discomfort. Here is an example of a rabbit recovering from being sick. The tooth grating sounds starts at about two minutes.

What sounds to rabbits make when they’re angry or scared?

Rabbits also make sounds to let you know they are angry or annoyed with you or something in their environment. These more aggressive sounds can also mean that your rabbit is scared of something. They might be trying to warn you of danger or trying to be brave even though they are afraid.

A growling rabbit means exactly what you would expect. Your rabbit is angry and giving you a warning. Rabbit growling doesn’t sound exactly the same as a dog, but it’s not too different (example). When a rabbit growls, they will usually also lunge or swat at whatever is annoying them to try to get it to go away.

Sometimes growling is accompanied by continued grunting sounds. This rabbit doesn’t want to be picked up, so he growls and continues to grunt at his owner until they stop. Be careful if you are trying to handle a rabbit that’s behaving like this. It’s very possible they will try to swipe at you or bite you.

Rabbit hissing is actually not very common. I’ve never heard this noise in person, but it is sound that rabbits can make. And this sounds exactly like what you would expect a cat’s hissing to be, so it’s pretty easy to understand. Here’s an example of someone who caught their rabbit hissing on camera.

This is not a vocal sound that rabbits make with their mouths, but I want to include it because it is probably the loudest sound you will hear your rabbit make. Rabbits thump by slamming their strong back legs against the ground. It sounds as loud as dropping a textbook flat onto the ground (example).

So you know that rabbits can screech, but you’ve never heard your rabbit make that kind of loud sound? Rabbits can scream, but it is incredibly uncommon. This is good, and I hope you never have to hear a rabbit scream.

Rabbits will scream when they are either incredibly scared or in a lot of pain. They have a very high pitched shrieking scream. It almost sounds like a bird call. The only time I have heard this in person was just after my elderly 13 year old rabbit had a seizure. It was a heartbreaking moment, and she passed away soon after.

I’m not going to link to a video for this one because everything that I have found is a video of people mistreating their rabbit (or wild bunnies). But you can’t mistake a rabbit scream for anything else.

Here’s a video of a couple happy binky bunnies instead!

Is the rabbit snoring?

Believe it or not, rabbits can snore. I was a little worried the first time I heard a rabbit who snored. I thought she might have had a respiratory problem. But I found out that it’s perfectly normal for rabbits to make some noises in their sleep.

Luckily rabbit snoring is not nearly as annoying as human snoring is. Rabbit snoring is a little squeaky, and usually it’s a soft sound. But sometimes you’ll get a loud snoring bunny, like this guy.

A couple medical signs to look out for. If your snoring rabbit also has nasal discharge, sneezes a lot, or has runny eyes, you should look for a rabbit savvy veterinarian. In these cases, the snoring could be related to a respiratory infection and you’ll want to get your rabbit medicine as soon as possible.

What about sneezing, should I worry?

Like most other animals, rabbits also sneeze. Rabbit sneezes sound like cute little squeaks while they shake their heads a little.This is a good example of a rabbit sneeze.

Just like humans, rabbits sneeze for many reasons. Sometimes it’s because there is dust in the air, and sometimes it for no apparent reason at all. If your rabbit just sneezes once or twice and stops with no more sneezing for the rest of the day, then it’s nothing to worry about.

However, if your rabbit is sneezing a lot or if the sneezing is accompanied by a runny nose, runny eyes, or wheezing, then you’ll want to get your rabbit to the vet as soon as possible. This is a sign of a respiratory infection or a rabbit cold, also called snuffles, and should be treated right away.

Do rabbits scream when they die?

Do rabbits thump for attention? 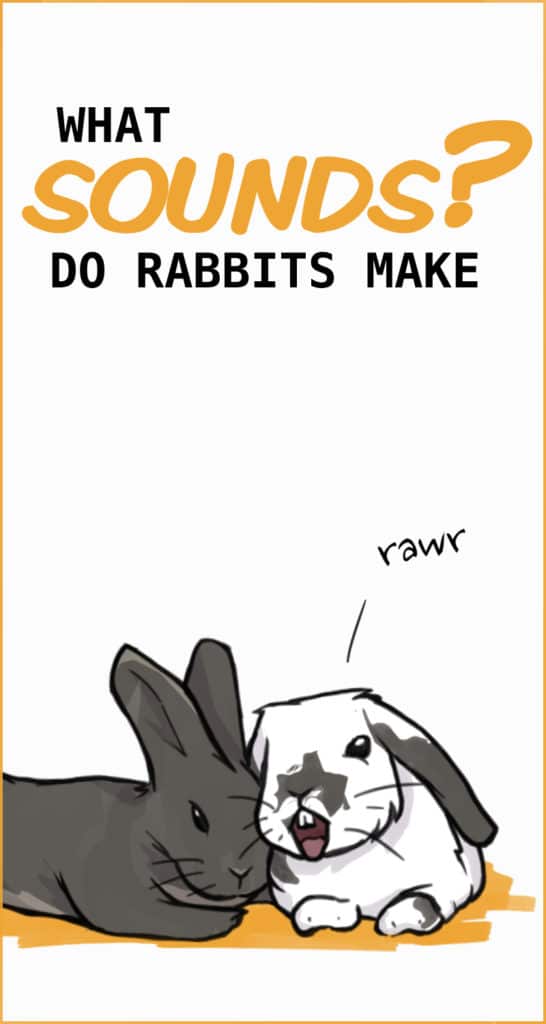