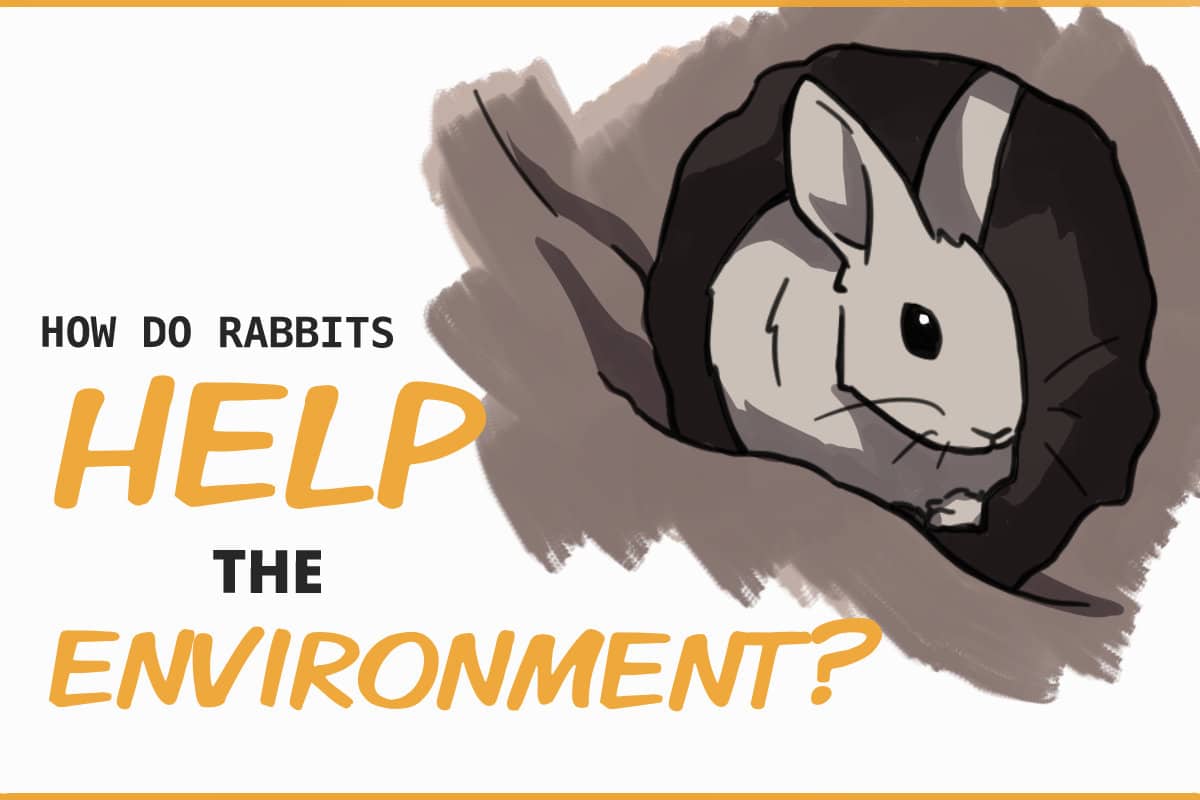 Around the world people think of rabbits as adorable pets, pests, or even a source of food. These varying opinions of rabbits at least partially result from the different ways that rabbits interact with the environments around us. In some places wild rabbits are able to fit into the local ecosystem and live harmoniously. However, that is not always the case. Sometimes rabbits have a much more destructive and dangerous impact on the environment.

Rabbits eat a large variety of plants, making them essential to keeping fast growing weeds under control. They are also a year-round food source for many predator species around the world. Wild rabbits only become a problem when they are introduced as invasive species. This causes devastating effects on the environment and local animal populations.

Everything from the availability of plants to climate change is impacting the way that rabbits live. Luckily for those of us who love rabbits, keeping them as pets can actually be a very environmentally friendly choice. These plant-eating herbivores have a smaller carbon footprint than most other popular pets. Even if you live in an area where wild rabbits are causing environmental destruction, you can rest assured that caring for a pet rabbit is a responsible choice.

How rabbits benefit the environment

When rabbits are a part of a balanced ecosystem, they actually have an important role to play. Species of rabbits, and related hares and pikas, exist naturally in many different climates and habitats all around the world. In their natural habitats, rabbits serve the two main functions of keeping plant life in check and providing food for carnivorous predators.

Because they can eat a wide variety of plants, populations of rabbits play an important role in keeping fast-growing weeds and plants from overgrowing. This ends up giving more sensitive plants a chance to gain some ground and sunlight without having to compete with the more prolific plants. Ultimately this encourages more biodiversity among the plants in the ecosystem.

Rabbits also have nutrient dense urine and feces that can help revitalize soil and keep it healthy. Whether the rabbits are burrowers, like European rabbits, or surface dwellers, like cottontails, their excrement will make its way into the soil to help nourish new plant growth.

While many of us would prefer not to think about it, rabbits are also a very important year-long food source for many predators. Most species of rabbit are able to reproduce very quickly, giving rabbit’s predators a consistent prey to hunt. Rabbits are also a type of animal that does not hibernate in the winter, so predators can hunt them even when other food sources are scarce. These natural predators keep rabbits from becoming overpopulated and completely depleting the foliage and plant life of their habitats.

All of this makes rabbits a very important part of their natural ecosystems. They are part of an environmental balancing act that helps all the plants and animals survive and thrive as species. The problem comes when parts of this balanced ecosystem are removed or displaced, causing rabbits to become a force of destruction, instead of a benefit to the environment.

How rabbits cause environmental destruction

Unfortunately, recent decades have seen rabbit populations overtaking new areas and becoming a force of destruction. This will happen because the rabbits themselves become displaced to environments that they are not native to. It also occurs when their natural environments begin to break down due to climate change and more human-made constructions.

Rabbits have been introduced by humans to new habitats as invasive species. These rabbits then quickly overpopulate the new area. This has happened in a number of places where domestic rabbits (European rabbits) have been released into the wild, including communities in the United States, Canada, and a number of countries in South America. The new rabbits reproduce quickly and compete with native species for food resources.

However, no place has been as hard hit by invasive rabbits as Australia. Rabbits were first brought over and released into the wild in 1859. In this new habitat, the rabbits did not have any natural predators and they were able to multiply incredibly quickly.

They began to compete with native animal populations for food and shelter, which also led to the depletion of natural plants and foliage in Australia. Since European rabbits are diggers, they will often dig up and eat new plants as shoots, making it difficult to encourage new growth of Australia’s native trees. This also causes soil erosion as the plant life is destroyed.

In addition to competing with native species for resources, rabbits have also attracted other invasive populations of foxes and feral cats who end up preying on and further depleting native animal populations.

All in all, the introduction of rabbits and other invasive species to Australia have caused a significant amount of environmental destruction. The disruption of the natural ecosystem has put many native species of animals and plants at risk of endangerment and extinction.

In many farming and gardening communities, rabbits are viewed more as a pests. A lot of flowers, fruits, and vegetables are yummy snacks for rabbits, and they will take advantage of any plant that is available to them. Sometimes this ready availability of plants can cause a boom in the wild rabbit population, especially around suburban neighborhoods that also give surface dwelling rabbits many hiding places to live with fewer predators.

As the effects of greenhouse gasses cause climates around the world to change, rabbits are also faced with a changing habitat and ecological system. As temperatures rise over time, even rabbits living in their native habitats will be forced to evacuate to live in areas better suited to their needs.

Rabbit species that are already endangered

Even though rabbits are thought of as a prolific and adaptable animal, there are actually many species of rabbits that are already endangered and threatened due to human influences and climate change. Even the European rabbit, who has been domesticated and taken over many continents around the world, is considered near threatened in its native habitat in Europe.

About one quarter of all lagomorph species (which includes rabbits, hares and pikas) are currently considered to be endangered or threatened.

How rabbits will need to adjust to rising temperatures

As temperatures rise many species of rabbit will be forced to move away from their current locations or face extinction. It is believed that climate change is going to affect the current territory of at least ⅔ of all species of rabbit by 2100.

Despite the many challenges facing rabbits in the wild, choosing to keep a rabbit as a pet can actually be a very environmentally friendly decision. Compared to other animals that are commonly kept as pets, rabbits offer many advantages. As long as you have responsible pet practices that prevent problems leading to overpopulation, then a rabbit can be an ideal pet for the environmentally conscious person.

While the vegan versus meat-eater debate is complicated and can be viewed from many perspectives, it is true that the plant eating behavior of pet rabbits creates a smaller carbon footprint than the carnivorous nature of a cat or dog diet. Meat production, especially beef, produces significantly higher greenhouse gas emissions than plant alternatives. If you are the kind of person who cares about the environmental impact of the food you feed your pet, then a natural herbivore is an excellent choice.

Rabbit poop is a great fertilizer

Both rabbit poop and urine can actually be used as an incredibly nutrient dense fertilizer. Rabbit defecations don’t have the same chance of causing disease that cat or dog feces do, and it can easily be composted or just tossed into the garden as fertilizer.

Even rabbit litter, which will normally be hay or paper based (as opposed to clay cat litter), can be composted alongside their poop. If you have a garden or a composting service available, none of your rabbit’s waste needs to go to waste.

Your trash is your rabbit’s treasure

Many of the best toys for rabbits come from materials that we would consider trash. Toilet paper tubes and cardboard boxes, for example, can easily be repurposed and reused as chew toys for rabbits. Sometimes these toys will be chewed up completely by a rabbit, but you can still recycle them after your rabbit has had their fun. Learn how to make some fun and cheap DIY toys for your rabbit.

Sourcing rabbit food from your community

You can further reduce the carbon footprint that your rabbit makes by sourcing their food locally or growing it yourself. A substantial portion of a rabbit’s daily diet should be made up of fresh leafy greens, which can include lettuces, herbs, or other salad greens. Even flower greens, such as dandelion greens, are great for rabbits.

If you have a yard or a community garden available, these are the kind of vegetables that you can easily grow for yourself. This will reduce the carbon footprint from manufacturing and transporting these greens to pretty much zero. You can also source from local farmers to keep the carbon footprint as small as possible if you are not able to grow a garden for yourself.

Even though rabbits are environmentally friendly pets, it’s still important to make sure you have responsible pet practices. There have been multiple communities that faced a rabbit infestation because someone decided to set their unneutered rabbits loose outside. Not only is this practice illegal in many places, but if the rabbits survive they can reproduce and overpopulate the area very quickly.

To prevent this, you should be responsible and make sure you get your pet rabbit spayed or neutered. It’s especially important to get your female rabbits spayed because they have a very high chance of developing uterine cancer if they are left in-tact.

You should also never set a domestic rabbit loose outside to get rid of them. This is a form of animal cruelty. Domestic rabbits have been bred for centuries to be friendly and have a muted fear response. If it ever comes to a point where you cannot take care of a pet rabbit anymore, then it’s important to find someone who can take your rabbit in, or surrender your pet to a shelter to re-home.

link to 7 Essential Supplies for a Rabbit Enclosure

Moving to a new home can be pretty stressful as is. Adding a rabbit into the mix can make anyone’s head spin. How do you keep your rabbit from getting scared? And how can you safely bring your... 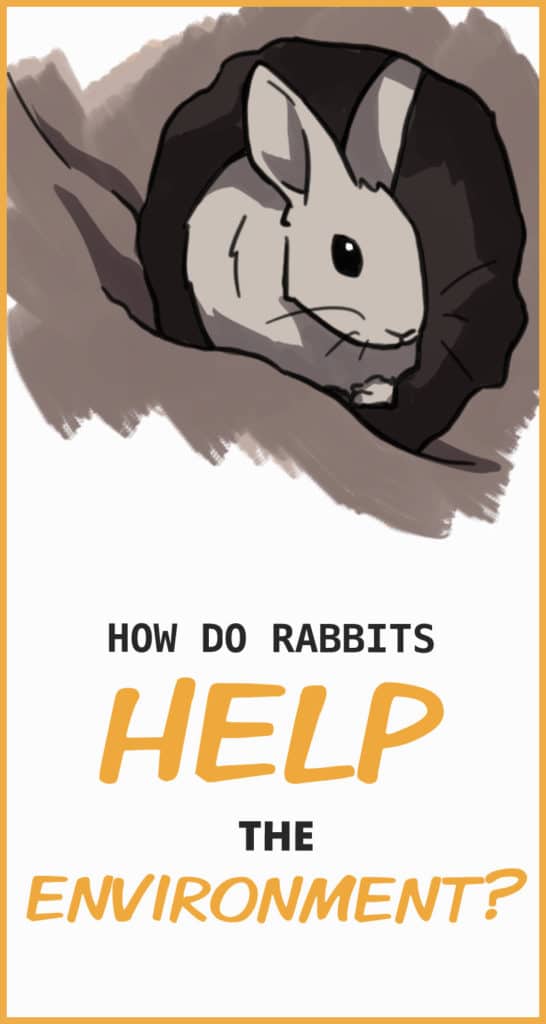