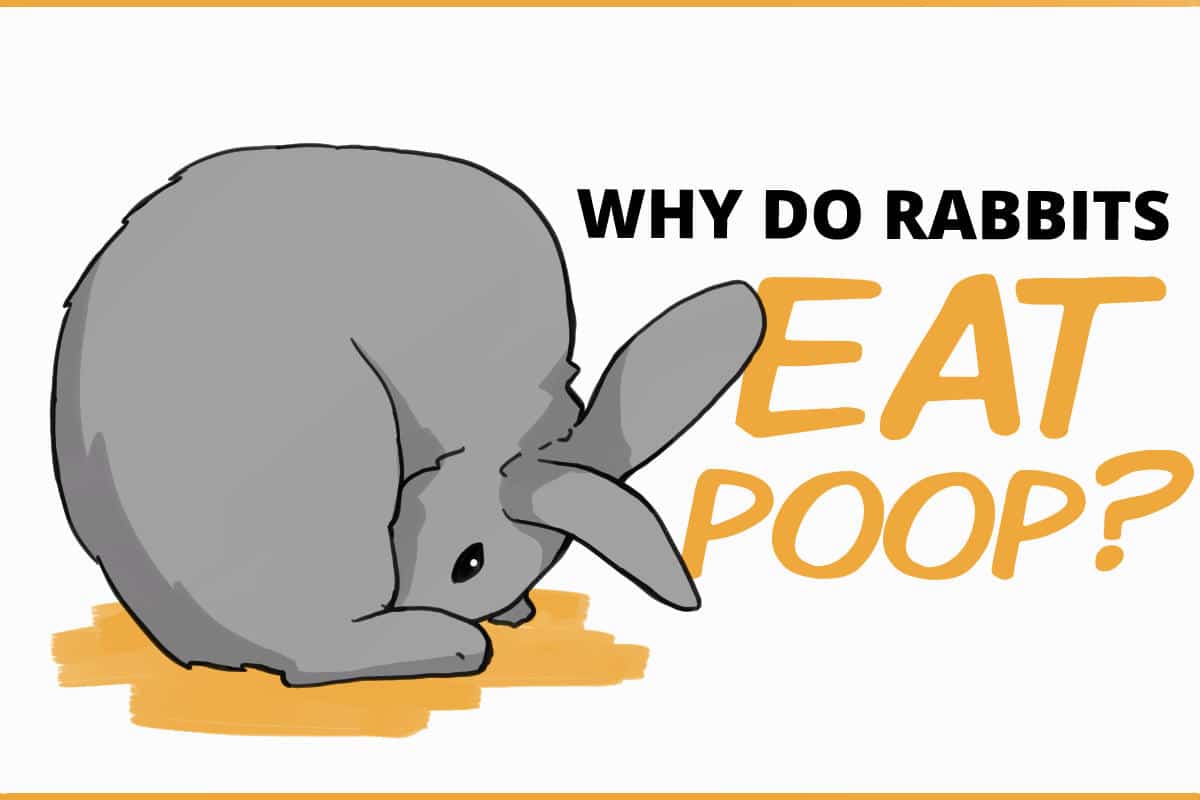 I’m sure you’ve noticed that little habit of your rabbit’s by now. They double over and appear to be cleaning their bum, but come up chewing on something that can only be their own poop. This behavior of rabbits, known as cecotrophy, is completely normal and even healthy.

Because of the way their digestion works, rabbits produce two different types of fecal pellets. Rabbits need to re-ingest one of these, called cecotropes, to gain the maximum amount of nutrients from their diet and keep their digestive system healthy.

Wild rabbits who were the ancestors of our pets, evolved to have this unique type of digestive system so that they could survive on a rough diet of foliage and bark. These kinds of materials have a high amount of fiber that most animals can’t extract any nutrients from. Rabbits have a way of putting food through their system twice, so that they can maximize their nutrients. They eat their own poop so they can digest their food the second time and remain healthy.

It’s healthy for rabbits to eat their own poop

Not only is it no big deal when rabbits eat their own poop, it’s actually very important to their health. If rabbits don’t eat a certain type of poop that they produce, called cecotropes, then they run the risk of becoming nutrient deficient. These special kind of poop allows rabbits to absorb nutrient out of their normal daily diet.

The way a rabbit digestion works is essentially by splitting everything they eat into digestible and indigestible categories. The indigestible content is responsible for keeping the rabbit’s digestion moving and it’s important for preventing GI Stasis. This is what all that fiber in a rabbit’s diet is used for and it forms those familiar cocoa puff poop balls.

The digestible content, however, takes a different route through the rabbit’s digestive system. This is sent to the rabbit’s caecum where it’s fermented by the important bacteria that live there and formed into cecotrope droppings. Your rabbit needs to eat these droppings in order to get all of the nutrients they can from their diet.

It’s important to make the differentiation between the two types of poop your rabbit produces. This will help you understand when your rabbit’s poop are normal and healthy and what those unusual poops you see every once in a while are.

These are the normal ‘cocoa puff’ rabbit poops that you will see in your rabbit’s litter box and scattered around. Usually rabbits will not eat these poops (but they might occasionally). Fecal pellets are made up of tiny indigestible particles, looking like sawdust inside.

The appearance of this type of poop will vary a little bit depending on your rabbit. To know if they are healthy you just need to look for consistency among the little poop balls. You want to see:

You shouldn’t see cecotropes very often because rabbits usually eat these directly out of their anus. However you may notice a cluster of cecotropes that your rabbit has missed on occasion. It’s very important for your rabbit to eat this type of dropping, so don’t try to prevent your rabbit from doing so, even if you think it’s gross.

People used to think that cecotropes were only produced in the evenings, rather than all day long like normal rabbit poops. However, this is likely just because it takes a longer time for these to run through a rabbit’s digestive system. If the rabbit is fed every morning, it’s natural that they wouldn’t show up in large numbers until evening.

What if rabbits aren’t eating their cecotropes?

Most of the time rabbits will eat their cecotropes directly from their anus. You’ll see your rabbit bend over and lick their but, to come up chewing on something a moment later. That’s why, you usually won’t see any cecotropes in your rabbits litter box, but they’re still producing them every day.

If you notice a lot of cecotropes that your rabbit is not eating, multiple bundles of these poops in a day, then that could be an indication of an unbalanced diet or some health issues that need to be diagnosed.

The rabbit is producing too many cecotropes

Most of the time when you notice a lot of cecotropes in your rabbit’s litter box or around the room, it’s because your rabbit is producing too many cecotropes so they don’t want to eat them all. This is usually the result of an unhealthy or unbalanced diet that is rich in sugary foods and low in fiber.

The lack of fiber in your rabbit’s diet forces their gut to slow down since the indigestible fiber is essential for keeping their digestion moving. The high sugar can also create an imbalance in the amount of bacteria in the rabbit’s gut, making them more likely to develop cecotropes that are mushy and not fully formed. These together can lead to illnesses in rabbits, such as GI Stasis. To prevent this, you want to make sure your rabbit has a healthy and balanced diet.

How to give your rabbit a balanced diet

The most important part of a rabbit’s diet is grass-based hay (such as timothy hay). You want to give your rabbit an unlimited supply of this hay so that they can munch on it frequently throughout the day. You’ll also want to give your rabbit a few cups of fresh leafy greens per day. These have a lot of nutrients that are important for keeping rabbits healthy, but they also have a lot of fiber in their structure.

For more information on a healthy rabbit diet, visit my article on Rabbit Diet 101.

The rabbit cannot reach to eat their cecotropes

Sometimes there are a lot of cecotropes scattered around because the rabbit is unable to reach their butt to eat their cecotropes. This can happen because the rabbit is too obese to reach around their folds of fat, but it can also happen with rabbits who are elderly and disabled with limited mobility. Rabbits often develop arthritis in old age that makes it difficult or painful to bend over.

If your rabbit is unable to eat their cecotropes for any of these reasons, then you’ll need to make a visit to your vet so you can diagnose the problem and help your rabbit recover. Your vet can guide you to get your rabbit onto a healthy diet or give you medication to manage the symptoms of arthritis.

For disabled rabbits who have limited mobility, you may need to make a regular habit of collecting their cecotropes and offering them to your rabbit as a snack.

Rabbits who eat their poop (not cecotropes)

While it’s healthy and normal for rabbits to eat their cecotropes, most rabbits will not eat their own fecal pellets. However, it’s not unhealthy for rabbits to behave this way. Rabbit fecal pellets, the cocoa puff poops, are basically just condensed balls of fiber that have had the nutrients stripped away. If you ever stepped on one or squashed it to see what’s inside, you’ll know it basically looks like sawdust. They are not going to provide any benefit to your rabbit, like cecotropes do, but they aren’t going to be harmful for rabbits to eat either.

The only time I would worry about this behavior is if your rabbit chooses to eat their fecal pellets instead of their hay, leafy greens and pellets. Since they won’t be getting any nutrients from these poops, you don’t want them to replace the foods that are actually healthy.

If you find that your rabbit is forgoing their healthy food and eating their poop instead then make a habit of scooping out their litter box frequently throughout the day. This way they won’t have any more poop to chew on, and they’ll go for healthy food instead. 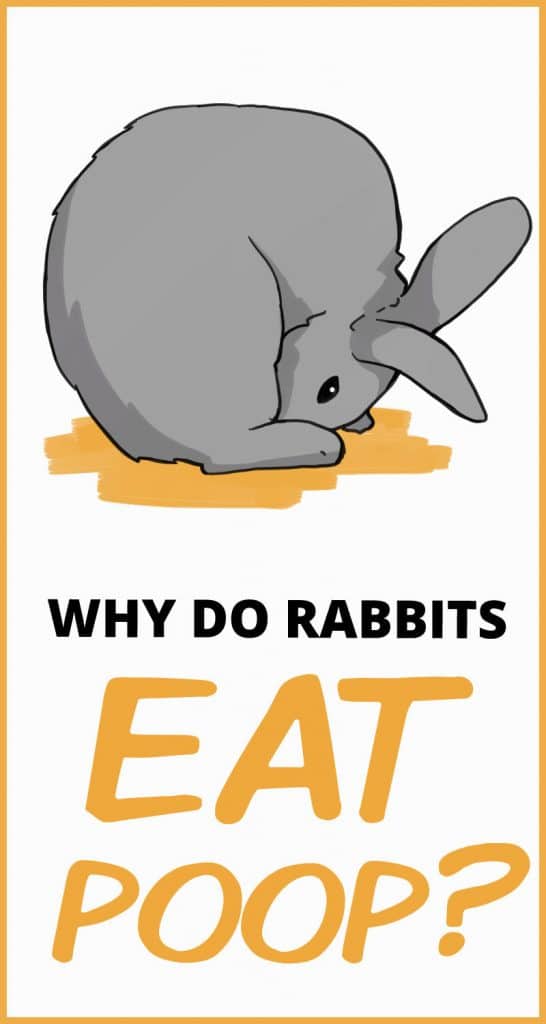