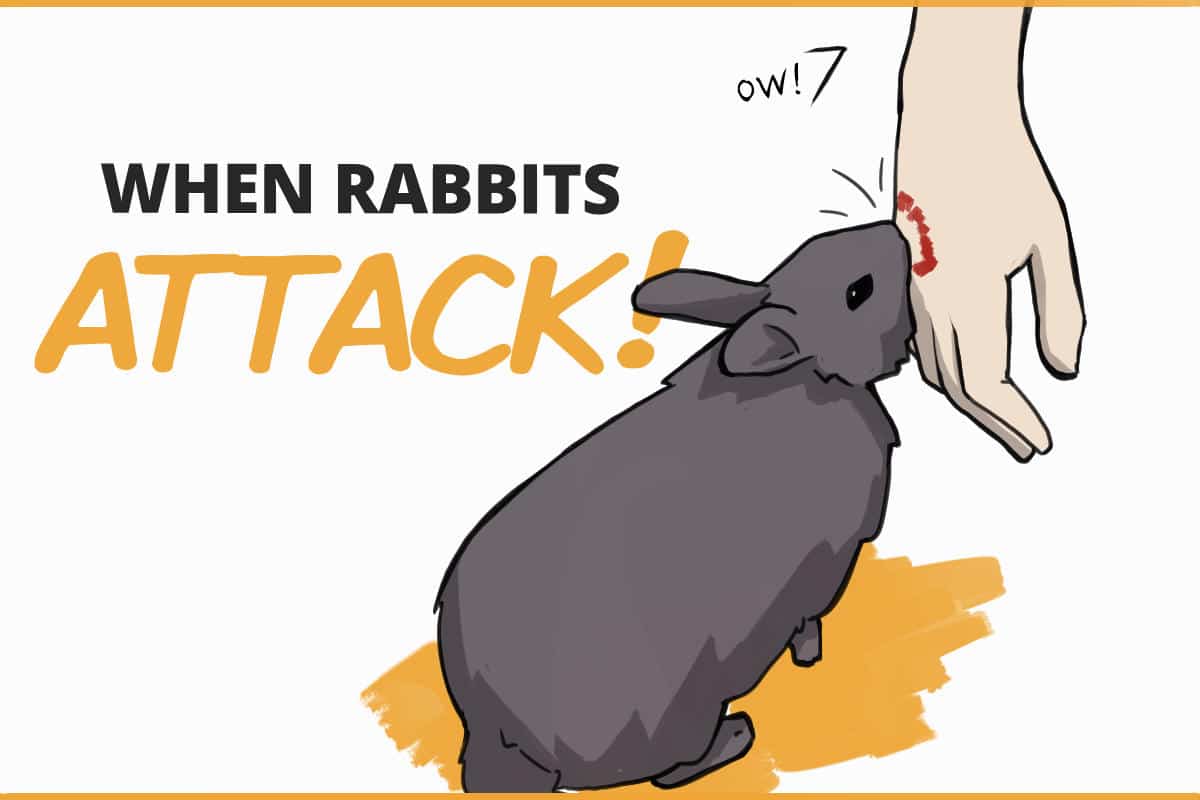 Most of the time rabbits are very gentle pets. They might give us a light nip occasionally to let us know we’re in the way, or they might mistake our fingers for treats, but it’s rare for a rabbit to show truly aggressive behavior toward humans. But it does happen. A rabbit attack can be a frightening and painful experience.

Domestic rabbits attack people because they are afraid, acting on a territorial instinct, or because they are in pain. Before they bite, rabbits will show aggression by growling, and lunging while their ears go back at a 45º angle. When they do bite, many rabbits will latch on and refuse to let go with their strong jaws.

While rabbit attacks can be painful, it’s rare for them to cause any serious damage or even infection. By using some basic protective clothing, you can sit with your rabbit to help them overcome their aggressive behavior.

Watch your rabbit’s body language and the context of their behavior to figure out what is causing them to attack humans. Then you’ll be able to work with your rabbit and their environment to solve their behavior problems and stop them from attacking.

The most common reason a rabbit will attack a person is because they are afraid. While a rabbit’s first instinct will be to run away and hide from anything that scares them, they can easily become aggressive and attack if they feel cornered.

Most rabbits who regularly attack humans out of fear have learned that their aggressive behaviors will get people to go away. At first, they likely turned to lunging and biting out of desperation, feeling that there was no place to run. After the aggressive behaviors worked to make people go away the first time, the rabbit learned to attack people more quickly. Eventually this behavior becomes a habit making the rabbit aggressive toward people all the time.

You can know if your rabbit is attacking because of fear by looking for other fear-based behaviors in your rabbit’s body language:

If you’ve been living with your rabbit for a while, you can also try to think about how this behavior started. Did they first start lunging at you to get you to go away when you were trying to pick them up? Or maybe you were trying to corner them to get them to return to their enclosure.

If you adopted your rabbit when they were older, it might be a little more difficult to determine the origin of their behavior. You can still watch your rabbit closely and investigate what you are doing that’s causing your rabbit to attack you. The more information you can gather about your rabbit’s body language, the easier it will be to solve their behavior problems.

How to get your rabbit to stop attacking

The only way to stop rabbits from attacking you and other humans is by teaching them to trust you. Once you gain your rabbit’s trust, they won’t be afraid of you anymore and will have no reason to attack you. You’ll probably want to wear protective clothing to keep from getting injuries during this process (more details to come).

Remember, this whole process is not going to take a single day. It can take weeks and months of working with your rabbit on a daily basis to help them overcome their fears and learn how to trust you. But in the end, you’ll be rewarded with a sweet companion, and your rabbit will have gained self confidence as they overcome their fears.

The other common reason that rabbits attack people is because of territorial instincts. Rabbits have strong behavioral instincts to protect a place they see as their own. Female rabbits are more likely to be vicious in their attacks as they work to protect their territory, but male rabbits can also show these territorial tendencies.

Usually territorial attacks will only happen in a space that the rabbit feels they own. For example, they may attack you if you reach inside their enclosure, but behave perfectly fine when they are out exploring the rest of the home.

Occasionally, a rabbit will feel a strong ownership of a larger area too. They might see the entire room as their territory and attack anyone who enters. In these cases, you may find a rabbit who nips at someone ankles whenever they enter the room. If they claim the spaces under the sofa or chairs, you may find your rabbit attacking you when you walk by.

You’ll know it’s territorial aggression if the rabbit is essentially trying to chase you away from a specific space. They’ll attack and lunge at you to keep you away from the entrance to their enclosure, or they’ll bite and latch onto your arm as you reach in to feed them.

How to get you rabbit to stop attacking

For most rabbits, the only way to improve their behavior when they are attacking you because of territorial instincts is to get them spayed or neutered. (note: it can take a few weeks after the spay or neuter surgery for the hormones to calm down and see improvement in the rabbit’s behavior).

If your rabbit is already fixed, but you are still seeing this behavior, you may want to consider what you smell like. Rabbits are often more aggressive towards other rabbits or animals than they are toward humans. If you regularly spend time with any other animals (such as your friend’s dog, or the family cat), you may want to be sure you change clothes and shower before spending time with your rabbit.

If, no matter what, your rabbit continues to show territorial behavior, then you’ll need to find ways to work around them. Wait until they are outside of their enclosure to replenish their food and water. You can also get them an enclosure that is easier for humans to walk into (such as a pet playpen). This way you can more easily wear boots and thick pants while you clean the enclosure and feed your rabbit.

Sometimes rabbits are aggressive towards people because they are in pain or discomfort. The pain from an underlying medical condition can, understandably, make your rabbit grumpy and irritated. To vent their frustration, they may lash out at you or anyone who comes near them. This is especially true if you try to pick them up or touch them in a way that makes the pain worse.

This is the most difficult type of aggression to understand, because it may seem like your rabbit is just attacking you out of nowhere. The best way to determine if your rabbit is in pain is by looking at their other behaviors:

How to get your rabbit to stop attacking

If your rabbit is acting aggressive toward people because they are not feeling well, then you’ll need to get them to a vet to help figure out the cause of the illness. Until you figure out what’s causing the pain or discomfort in your rabbit, they likely won’t stop attacking when you go near.

Sometimes, especially with elderly rabbits, they have developed arthritis and have joint pain. The veterinarian will be able to give you pain medication to help your rabbit manage the pain and improve their mood. However it could also be a more serious condition.

Rabbits have the tendency to hide their illnesses because in the wild that would prevent them from being easy targets for predators. Your rabbit’s aggression could be their way of trying to hide a serious illness from you, so it’s best to make an appointment with a rabbit specialist veterinarian so you can diagnose the problem and help your rabbit recover.

How to protect yourself when working with an aggressive rabbit

When working with aggressive rabbits to help them overcome their bad behaviors, it’s important for you to take steps to protect yourself. Rabbit bites are rarely serious, but they can hurt a lot! Wearing protective clothing can give you the confidence you need to stay around your rabbit even when they are trying to bite you, so you won’t feel the need to run away from your rabbit.

Signs of aggression in rabbits

Most of the time rabbits won’t go straight to biting people. They will usually give you warning signs first to let you know that they are angry and ready to attack. Pay attention to these signs of aggression in rabbits so that you can pause what you are doing and de-escalate the situation before your rabbit tries to bite.

Can rabbits spread disease through bites

While technically a rabbit can spread disease through their bites, there is very little chance of this actually happening or causing any significant harm. It is theoretically possible to get tetanus from a rabbit bite, or for them to transmit the parasite, E. cuniculi. However, these are both extremely unlikely and if you are up-to-date on your tetanus vaccinations, then it’s more or less impossible.

Rabbit bites don’t often cause serious infections either. Their mouths tend to have less bacteria growth in them than carnivorous animals, such as cats. Their incisor front teeth also leave cuts that are narrower as they get deeper. This results in the wounds healing quickly and prevents any lasting damage.

That being said, it’s still best practice to wash out any rabbit bites with soap and water. This will further prevent the bite wound from becoming infected from the bacteria in your rabbits mouth, or something you come into contact with after the fact.

It is very rare for a wild rabbit to attack a human. Their first instinct is always to run away from danger, so a wild rabbit will only attack a human if they feel cornered, or if they feel that their home is in danger (for European rabbits). Even as a last resort, wild rabbits will often try to use their strong hind legs to thump at a perceived threat (you) and knock you off balance before they try to bite and use their teeth.

Do wild rabbits have rabies?

Technically it is possible for wild rabbits to be infected with rabies. However, it is extremely rare since most rabbits that are attacked and bitten by other animals affected by the virus do not survive. At this time there are not any known transmissions of rabies from a rabbit to a human. 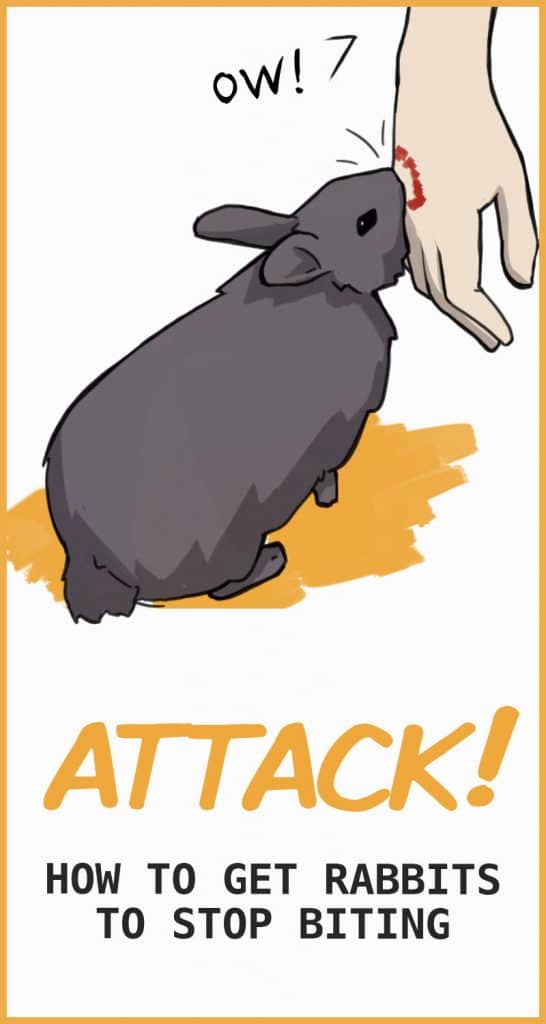