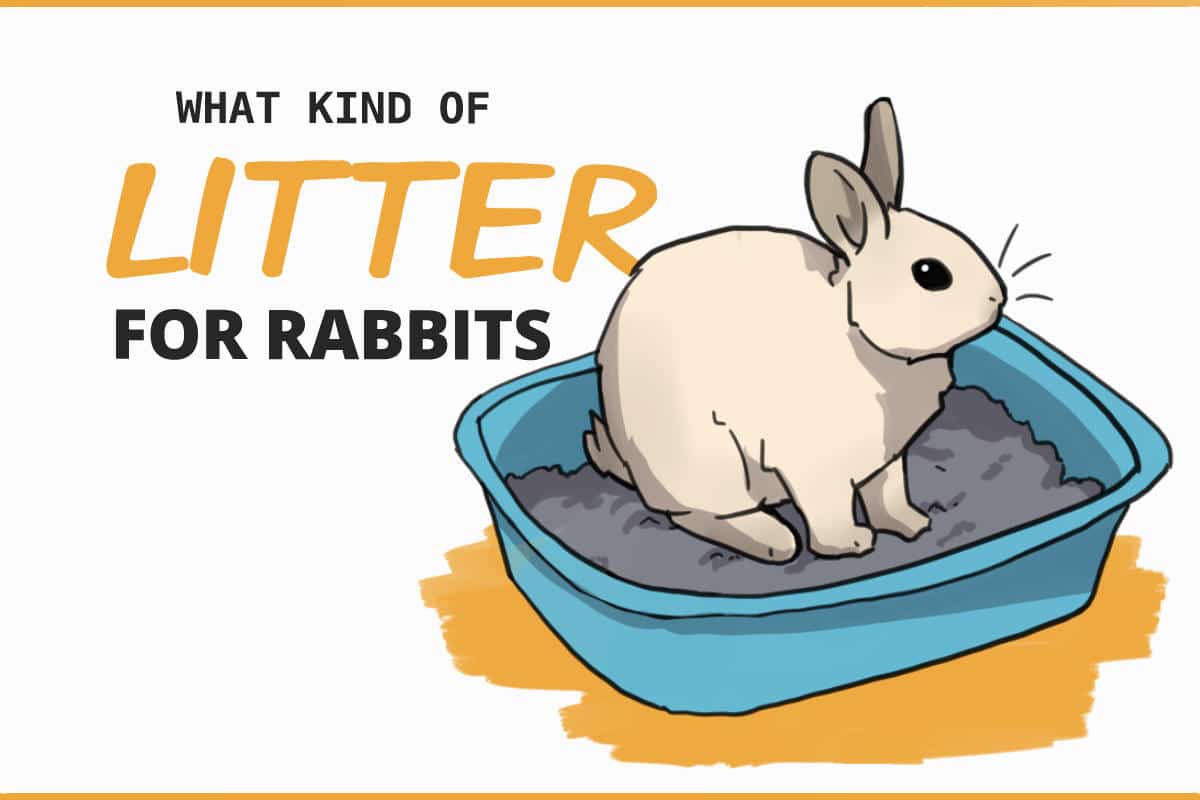 While it may seem inconsequential, the type of litter that you use in your rabbit’s box is actually very important. The wrong kind can end up causing health problems in rabbits or, in some cases, make them avoid using the litter box altogether.

The best kind of litter to use for rabbits is a paper based, unscented litter. This has the best absorbency and odor control while also being safe for a rabbit’s digestive and respiratory systems. Other options that are safe for rabbits include aspen shavings, wood pellets, shredded paper, and soft paper-based bedding material.

In addition to the type of litter, you also want to think about how much litter you use, how often you clean the litter box and the proximity of the box to a hay rack or hay pile. By taking all of this into account, you will be able to keep your rabbit comfortable and more likely to continue using the litter box. These tips can also help you keep any rabbit urine odors from permeating your house.

What to use for your rabbit’s litter

Every year it seems like there are more and more options out there for litter. There’s litter marketed for rabbits and small animals, bedding, and what seems like a hundred different kinds of kitty litter. It can be incredibly confusing to find the types of litter that are actually safe to use for your pet rabbit.

Rabbit safe types of litter include:

My preferred brand of litter to get for my rabbit is Unscented Yesterday’s News. It’s a recycled paper-based pelleted litter. It’s marketed towards cats, but is perfectly safe to use around rabbits. I find that this particular litter is excellent at absorbing rabbit urine and it keeps the smell to a minimum.

What NOT to use for your rabbit’s litter

While there are many types of litter that are safe to use around rabbits, there are also a lot of common brands of litter that you should avoid. Rabbits will often eat some of their litter, so we can’t use any type that can cause digestive problems in rabbits. You also want to avoid litters made of poisonous wood or with particles that can cause respiratory problems after prolonged exposure.

The types of litter to avoid include:

Is cat litter safe to use for rabbits?

In most cases, the popular brands of cat litter are not safe to use with rabbits. Most kitty litter brands are made to clump up around their urine, making them easier to clean. This is perfectly safe for most cats, since they don’t usually eat their litter, however rabbits have different habits.

They will often nibble on pieces of their litter. Some rabbits end up eating quite a lot of it. This can cause the litter to clump up in the fluids of a rabbit’s stomach, resulting in a blockage in a rabbit’s digestive tract.

However, there are other types of litter marketed for cats that are safe to use around rabbits. In fact, my preferred litter brand (Yesterday’s News) is a kitty litter. This one is made of recycled newspaper, which is safe for rabbits to eat.

Instead of looking for the products that are specifically marketed toward rabbits, it’s best to look for the materials that the litter is made out of. That’s what will help you pick out the best products for your rabbit.

How much litter to use in a rabbit litter box

Rabbits don’t bury their poop the way cats do, so you actually don’t need to use a large amount of litter. Instead, the amount of litter you use just needs to be enough to soak up your rabbit’s urine. This will help prevent a strong urine odor from escaping the litter box and it will keep your rabbit’s feet and bottom from becoming urine stained or getting urine scalding.

For most rabbits, this means you’ll only need a layer of litter that’s about half an inch thick. However, it depends on how much your rabbit pees (larger rabbits usually urinate more and need more litter), and the absorbency of the litter.

Pelleted litters, such as those made with recycled paper or compressed sawdust, tend to absorb urine better so you won’t need to use as much on a daily basis. Softer litters, such as soft bedding and aspen shavings, don’t have a high absorbency and will probably need to be used in larger amounts to collect all of your rabbit’s urine.

Should you include hay inside your rabbit’s litter box

If you’ve seen any of my videos on Youtube, you’ll see that I add hay directly to my rabbit’s litter box. This is a common practice with the rescue rabbits I work with at the animal shelter also. We do this because rabbits like to munch and poop at the same time. By including the hay inside your rabbit’s litter box, you are encouraging them to have better litter training habits.

You can achieve the same effect by using a hay rack right next to your rabbit’s litter box. Hang a large hay rack or place a standing rack near enough that your rabbit can forage and pull at the hay while they are using the litter box.

If you do put your rabbit’s hay in the litter box, you also want to make sure to clean out any soiled hay on a daily basis. The pee will end up causing the hay to spoil over a few days, so it’s best to clean it out when you do your daily litter box cleaning.

It’s important to set up a routine around cleaning your rabbit’s litter box. As annoying as it can be, I recommend taking the time to scoop out the litter box every day. This can help you keep a closer eye on your rabbits health, and prevent smells from building up.

Cleaning out the litter box every day allows you to:

However, this doesn’t mean you have to completely wash out the litter box. In fact sometimes it’s better NOT to wash the litter box out so it’s squeaky clean. Keeping a little bit of that urine stain on the bottom of the litter box is perfectly fine and the scent of it can keep your rabbit from getting confused and not using the litter box. Usually just scooping out the poops and soiled litter on a daily basis is enough to keep smells to a minimum, especially if you are using enough litter to fully absorb the pee.

How to wash a rabbit litter box

If you find that the rabbit litter box is starting to smell even when you’ve put in fresh litter and hay, then you may want to take the time to wash out the whole box. It’s a good idea to clean out the box a few times a year just to prevent any bacterial growth.

When you wash the litter box, you’ll want to make sure you use a pet safe cleaner. You can purchase bottles of these (such as this Puracy cleaning spray), or you can make your own using equal parts water and vinegar (1 cup of water + 1 cup of white vinegar).

Spray the litter tray and leave it to soak for an hour or so. Then wash the litter box and return it to your rabbit. There will almost always be urine stains that won’t come out no matter how hard you scrub. Don’t worry, you’ve sanitized it to stop any bacterial growth and your rabbit won’t mind the spot.

When you dispose of rabbit litter, you can just toss it in with your trash. However rabbit poop is actually a really excellent fertilizer. It’s got a lot of trace nutrients to help a garden grow, and it doesn’t have any potentially harmful diseases like cat and dog poop.

You could also add it to a compost bin. If you’re using a paper-based litter, everything in your rabbit’s litter box is compostable. The paper, poop, urine, and hay, can all go into the compost bin to become a rich mulch later on. Most commercial composters, however, will not accept any kind of animal leavings since other common pets are known to carry diseases in their feces, so this is really only an option if you have your own composter at home.

If you find that your rabbit’s litter box is emitting a strong smell in the room, then there are some steps you can take to help reduce the odor in your home.

Rabbit pee can emit a strong odor because it has a high concentration of ammonia. For most rabbits you will only notice the smell for a minute or so directly after the urinate until it gets absorbed into the litter. However, some rabbits have a stronger urine smell that can cause more of a problem.

Try a combination of these to reduce the smell of urine:

What type of litter box to use for rabbits

While we’re talking about litter, I may as well go over litter boxes. Do not get those little corner boxes that are marketed for rabbits. They are way too small and uncomfortable for rabbits, and make better litter boxes for smaller mammals, such as rats.

Instead, it’s best to get cat litter boxes. You want to give your rabbit enough space to fit into and turn around inside the box. Typically this means a larger cat litter box is best (or just a large plastic bin), but smaller rabbits would be fine with a smaller kitten litter box.

However, not all rabbits will learn right away. If you are struggling to teach your rabbit how to use the litter box, check out my step by step litter training article. I go into detail about how to litter train your rabbit and if you scroll to the bottom I also give you tips for common bad litter box behaviors.