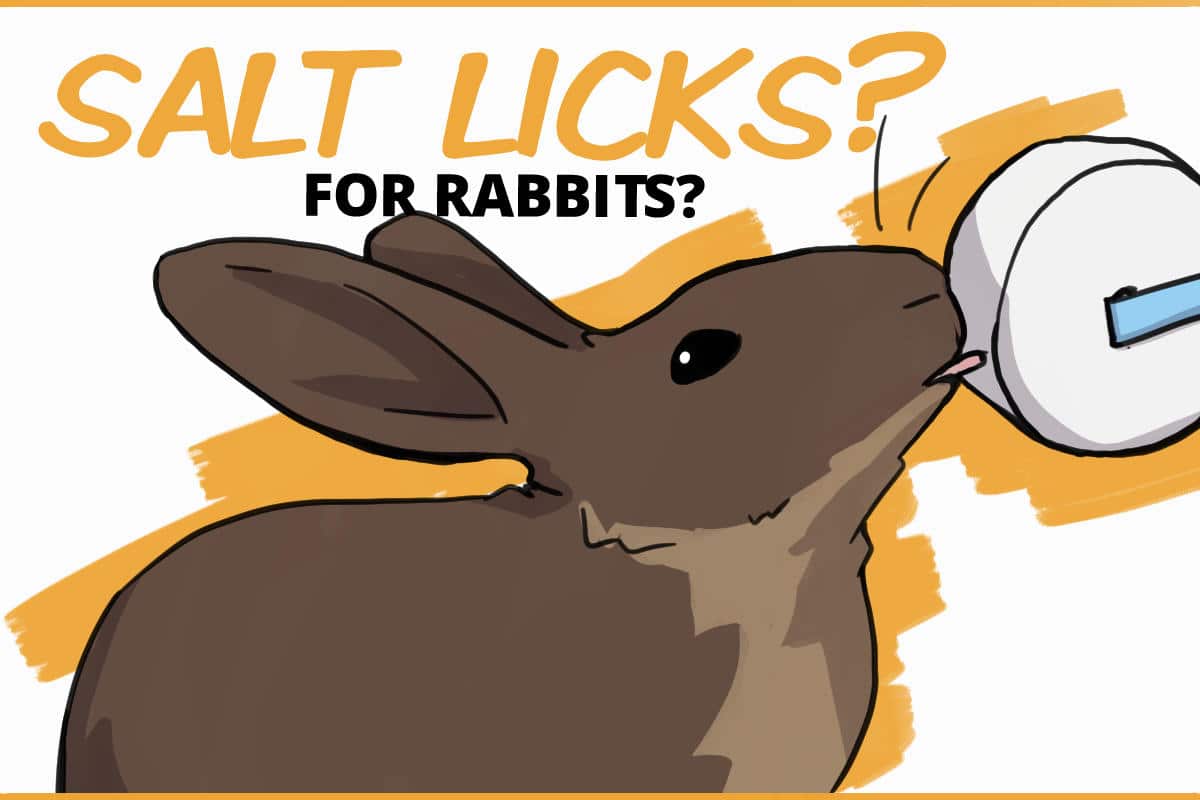 As you’re going through the store and getting supplies for your bunny, you might occasionally come across a salt lick. These are often marketed towards rabbits as a necessary addition to their habitat, but is this just another trick to try to get you to buy more pet supplies that you don’t really need?

Rabbits who are given a balanced and healthy diet do not need salt licks or mineral blocks. All of the nutrients that they need are available in a healthy pellet mix for adult rabbits as well as the variety of fresh leafy greens they receive every day.

There is usually no harm in providing a salt lick to rabbits. They are able to regulate how much they need and avoid overeating the salt or drink enough water to compensate. However there are some scenarios where providing a salt lick can be dangerous. On the other hand, if you are making change to your rabbits diet there are cases where it makes sense to consider giving your rabbit a salt lick so that they can correct for any nutrient deficiencies.

In general pet rabbits don’t need access to a salt lick in order to remain healthy. However like most animals, they need sodium to live and maintain bodily functions. Sodium is one of the major components of salt. So rabbits do need salt, but they are able to get all of the salt they need from their regular diet.

Most pet rabbits get the majority of their daily salt requirements from their pellets, but there is also salt in just about everything that rabbits eat. There are traces of salt in all the leafy greens you give your rabbit, as well as their hay. Even water will have some amount of salt dissolved in it unless you give your rabbit pure, distilled water.

The reality is, there has been very little research into the amount of salt that a rabbit needs on a daily basis, but there is also no evidence or known cases of otherwise healthy pet rabbits who suffer from salt deficiency. The closest estimate I was able to find was a 1977 paper detailing nutrient needs of rabbits (Nutrient Requirements of Rabbits, 2nd ed). It states that salt consumption was believed to be adequate at just 0.5% (about 0.2% sodium) of a rabbit’s diet. For the average sized rabbit, this would probably be equivalent to about 4g of salt per day (or less than 2g of sodium).

That is a very small amount of salt that rabbits are easily able to consume from their daily diet. It’s also a very rough estimate that hasn’t been clinically confirmed. Essentially what it comes down to is this: if your rabbit has a healthy diet with a variety of foods and their behavior is normal, then they have no need off the added salt found in a salt lick.

Where rabbits get their salt

Rabbits will normally get all of their daily requirement of salt from their pellets. Wild rabbits tend to have a lot of leafy greens, twigs, bark, and even soil in their diet which provides them with many different nutrients. As pets, our rabbits don’t have this same variety, so giving our rabbits a small amount of a healthy, fortified brand of pellets will provide them with a lot of the trace nutrients that can keep our rabbits healthy.

There is also salt found in leafy greens, hay and even water, but it’s not nearly as much as is included in pellet mixes. The amount of salt and nutrients found in these usually depends on the quality of the soil they were grown in, so it can vary widely.

For this reason, the one occasion that I recommend giving your rabbit a salt lick in their enclosure is if you give them a pellet-free diet. This will allow your rabbit to more easily regulate their sodium intake if they don’t have pellets as a source of salt.

Are salt licks harmful to rabbits?

While in general I don’t recommend getting a salt lick for your rabbit, that’s because they are unnecessary and not because they are harmful to rabbits. Rabbits (both wild and domestic) are pretty good at regulating their own salt intake. They won’t go out of their way to eat more salt than they need, and their bodies will adjust to the levels they are able to get.

As a result, most rabbits will just ignore a salt lick if you give it to them. Some might enjoy the flavor of a salt lick, but it’s unlikely that they’ll eat more than they can handle. They would likely just drink more water to compensate. However, there are a some scenarios where providing a salt lick may pose a higher risk to rabbits.

Rabbits who are bored may end up chewing on and eating pieces of a salt lick even if they don’t need the sodium. This can lead to the rabbit eating too much of the salt and possible other minerals that are in the licking stone. This, of course, can be bad for the rabbit’s health because they are no longer focused on their salt-intake needs, but instead they are eating because they are bored (similar to the way humans eat when we’re bored, even if we aren’t hungry).

Rabbits who are kept alone in a small cage all day have the highest risk of becoming bored and chewing on a salt lick when they shouldn’t. You’ll need to make sure you take care of your rabbit’s mental and physical needs to make sure they remain happy and healthy.

Many salt licks do not simply provide salt for rabbits, they also have other minerals and nutrients included. In fact, most of the time salt is a very small percentage of the minerals that are available on these blocks, while calcium tends to show up in high amounts. If your rabbit has a pellet-free diet, this is another way you can help them obtain some of those trace nutrients that they would normally get from their pelleted feed.

Like salt licks, mineral blocks are typically not necessary for rabbits who have a healthy diet with fortified pellets. Mineral blocks are not likely to do any harm either, but they have different flavors and are often more tempting to eat than pure salt licks.

There was also a study in 2008 that suggested rabbits who had access to mineral blocks ended up with an increased appetite, and subsequently gained weight more easily. However, this was a short-term study and showed nothing about potential long term health consequences of providing mineral blocks.

The best I can deduce is that you should treat these the same as salt licks. They are not necessary for most rabbits but also probably are not going to cause any serious harm.

Do rabbits lick people for salt?

Many rabbits enjoy licking people or objects, such as pillow cases, that have a lot of sweat on them. If your rabbit does this, then you might be worried that they are licking you for salt and it means that your rabbit isn’t getting enough sodium in their diet.

For the most part, this does not appear to be the case. In very rare cases, a sudden increased craving for salt can be a sign of kidney disease, but it’s not something I would worry about if your rabbit’s behavior is normal and active.

More likely your rabbit is licking you either because they like the flavor of your sweat, they are showing deference to you, or because they are trying to show you affection. Among groups of rabbits, they will groom each other as a way of telling each other they care. There are also levels of dominance in rabbit society, so the dominant rabbit will be groomed more often by the other underling rabbits.

By licking you or your clothing, your rabbit could be telling you how much they love you. They could also be saying that they know you’re the boss, but I think that’s a pretty rare rabbit who will admit that!

Pillow licking, or licking other bedding with your scent on it, is also common among rabbits. Again, it could be that they just like the flavor of your sweat, but it can also be a way of grooming something that smells so much like you. By licking they may also be trying to spread their own scent and claim the pillow as their own instead. 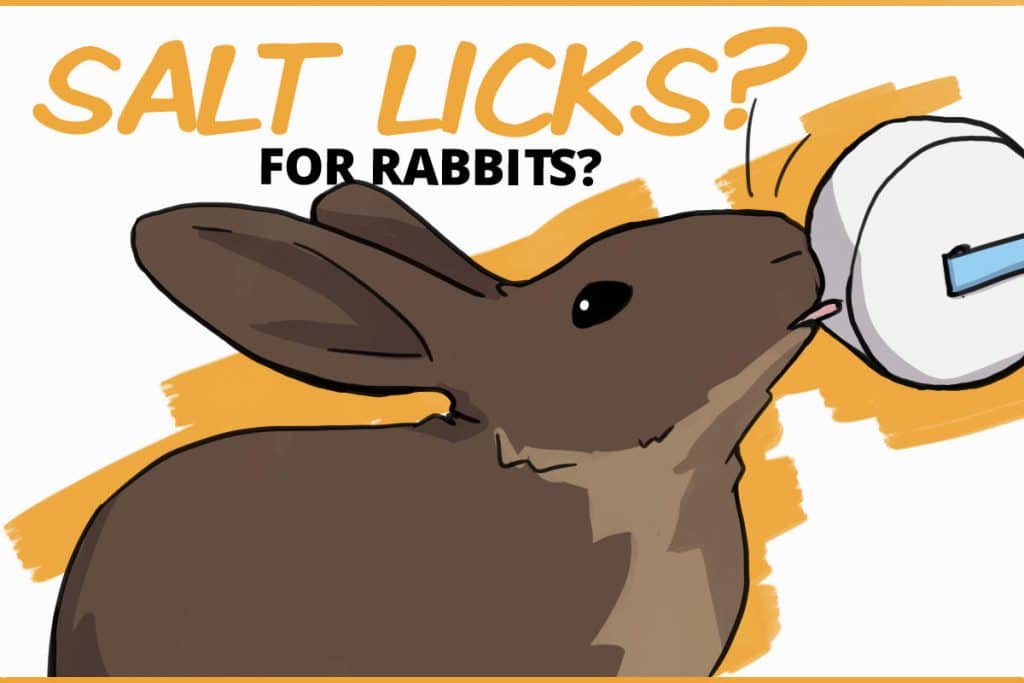