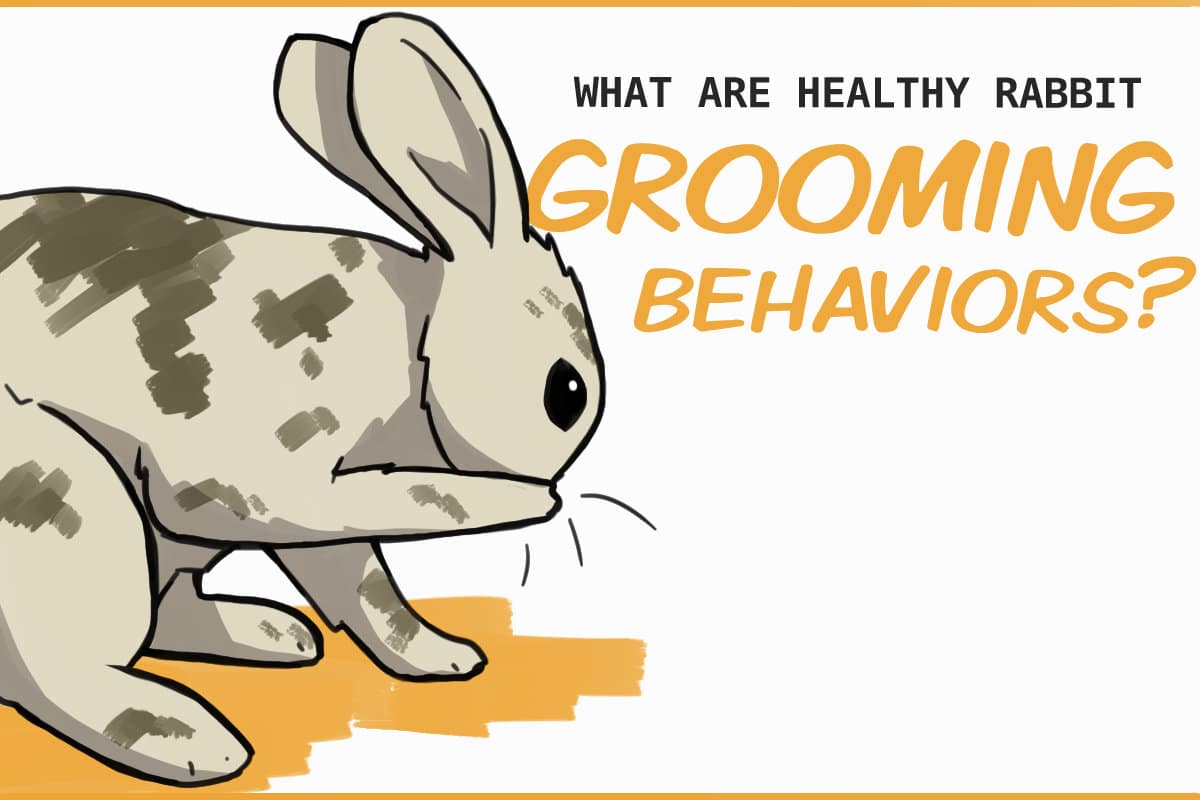 One of the most adorable rabbit behaviors to witness is their grooming routine. Rabbits have the cutest way of using their paws to wash off their face and ears. Like a cat, this is how rabbits are able to keep clean. It’s part of a long cleaning ritual that rabbits use to lick themselves all over and keep their coat from getting dirty and dull.

Rabbits are actually very clean animals and spend a good portion of their day grooming themselves. This grooming behavior uses their tongue to clean themselves all over, including their face, ears, and bottom. Their constant grooming should leave the rabbit’s coat sleek and shiny, so a thinning or bedraggled coat may be cause for concern.

By learning about normal grooming behaviors in rabbits, you’ll be able to know when something is wrong with your rabbit’s health. You can also learn how to help your rabbit get rid of all that extra fur when shedding season comes around.

Healthy rabbits will spend a good portion of their day keeping themselves pristinely clean. You will probably see them multiple times a day going over thier whole body with their tongue. Some rabbits are a little shy about cleaning themselves though, so they may try to wait until no one is looking before starting their cleaning routine.

Rabbits will clean their face by licking their front paws and wiping them over their nose and eyes. They’ll clean their ears by pulling them down to lick. These are the most iconic part of rabbit grooming behavior, but they also clean themselves by bending over to clean their sides and behind, and they’ll spend some time sticking their legs out to clean their paws as well.

This self grooming behavior is what keeps a rabbit’s coat clean and soft. As long as they are kept in clean conditions, even snow-white rabbits are able to keep their fur looking perfectly clean.

Rabbit breeds with longer fur, however, may need some help keeping the tangles out of their long coats. Their fur becomes  tangled and matted more easily, making it more difficult for the rabbit to keep it clean. Most long-haired rabbits will require weekly (or sometimes daily), brushing sessions with you to help keep their coats in good condition. Since many rabbits don’t like to be groomed by people, this can be a challenge. If you’re struggling with this, check out my article on how to groom rabbits.

During heavy shedding seasons, even the most immaculate self-grooming rabbit will have a slightly shaggy coat. They’ve got a lot of fur coming out very quickly and they generally aren’t able to keep up with it. You’ll see tufts of fur sticking out, especially around your rabbit’s behind.

During this time, it’s best for you to help your rabbit out by brushing them. Some rabbits will require daily brushing during big shedding seasons, while you’ll be able to get away with once a week brushing for other rabbits.

Grooming your rabbit during their big shedding seasons is important because it means they won’t be ingesting as much of their own fur. In the summer, it can also help your rabbit lose their thick coat faster, which means they’ll be able to stay cooler and avoid heat stroke.

Should you worry about hairballs?

However, ingesting an excess amount of fur can become a problem if the rabbit’s digestion is slowing down for other health reasons. When your rabbit’s gut slows down, the fur that normally passes right through, can end up contributing to it and play a part in the rabbit developing GI Stasis or related conditions.

Therefore, even though fur will normally pass through a rabbit’s system with no problem, it’s best to help them shed any excess fur by grooming them. If you notice a lot your rabbit’s poops are linked together by strands of fur, then that’s a good indication that it’s time to groom your rabbit so they aren’t eating as much fur.

Grooming in bonded pairs of rabbits

Rabbits will also groom each other when they live in groups and bonded pairs. This is commonly a sign of affection between rabbits. It is a way for one rabbit to show another that they care about their cleanliness and well being, so you’ll often find bonded rabbits licking each other on the head.

Licking and grooming behaviors can also signal dominance in the social hierarchy of rabbits. The rabbit who receives the most grooming from others is the most dominant bunny in the room. This dominant rabbit might occasionally gift one of the submissive bunnies with a little lick, but she’ll expect to be groomed by her fellow bunnies frequently.

How to know if your rabbit is over-grooming

Rabbits groom themselves multiple times a day, so it can be difficult to know when rabbits are over-grooming themselves. Grooming can be a self-comforting behavior for rabbits. If they are stressed, anxious, bored, or even a little sick, a rabbit might try to feel better by self-grooming more often.

Unless you know your rabbit’s normal grooming routine very closely, it’s nearly impossible to know if your rabbit is over-grooming simply by watching their behavior. Instead you’ll have to look for more severe signs of excessive grooming. This will usually look like bald patches on the skin or spots with thinning fur. You might also notice irritated skin or scratch marks in areas where you rabbit might be over-grooming or scratching, such as behind their ears.

Health concerns associated with overgrooming include:

Health concerns for rabbits who won’t self groom

A rabbit who isn’t keeping themself clean is another sign of health or mental health problems. Sometimes this is because the rabbit is physically not capable of grooming themself properly.  This could be as a result of an unclean environment or it could be caused by health related problems, such as obesity and arthritis. Depression is another common cause of a rabbit with a dull and shaggy coat.

When a rabbit is unable to groom themselves

Sometimes rabbits try to stay clean, but are unable to because their environment is not kept clean enough. As caretakers, it’s important that we take the time to clean out our rabbit’s litter box and enclosure frequently so that we can help our rabbits stay clean. This has an added effect of keeping any smells from building up. We won’t have to worry about our house starting to smell like a rabbit.

Obese, disabled and elderly rabbit may also struggle to keep themselves clean. These rabbit’s often have trouble cleaning pee stains around their rear end, and they can develop a condition known as poopy-butt. This is when the rabbit is unable to clean their bottom properly, so a ball of poop start to form, sticking to their fur.

Obese rabbits, have this problem because they have trouble reaching around folds of fat to clean themselves. Usually this is caused by an unhealthy diet, so the rabbit will need to be transitioned to a new, healthier diet to help them lose weight.

Elderly rabbits can have this problem because they are likely to develop arthritis as they age. This can make it painful for the rabbit to bend over to clean hard to reach areas. If you talk to your vet, they can prescribe some pain medication to help your rabbit manage their arthritis.

Rabbits who are suffering from depression will often lose interest in keeping themselves clean. They’ll allow their coats to get dull and scruffy while they sit around all day. Rabbits with depression will begin to lose their adorable rabbit curiosity, losing interest in the world around them. If rabbits don’t have enough socialization and enrichment in their lives, they may end up becoming depressed. Learn more about the signs of depression and how to help your rabbit recover.

If your rabbit has an underlying illness or health concern that is causing them pain, they may end up neglecting their cleaning routine. This can be caused by anything from overgrown teeth to a urinary tract infection. For this reason, it’s important to make an appointment with you vet as soon as possible if your rabbit is struggling to groom themself and keep clean.